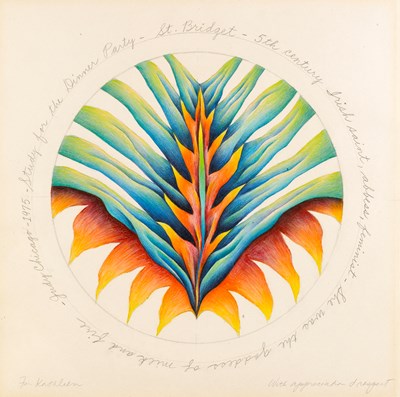 
A design for one of the plates for The Dinner Party, representing Saint Bridget (Brigid) of Kildare (c.451-525), one of the patron saints of Ireland, who founded several convents there. As the artist has written, ‘Through Bridget the Celts maintained their religious ties to Mother Goddess worship, for she came to be associated with all the symbols that had formerly belonged to the Celtic goddess…Fire was holy to the Goddess, who was often depicted with a column of fire – an image of immortality which I incorporated into Saint Bridget’s plate, painted in the colors of Ireland.’The present sheet was presented by Judy Chicago to Kathleen Schneider, a young artist from Idaho who became part of the Women’s Collective in Santa Monica that assisted in the production of The Dinner Party, working in particular on the stitching of the table runners and the embroidery. Schneider worked on the project for about a year between 1976 and 1977, sharing responsibility for much of the needlework with another assistant, Susan Hill. As Schneider later recalled, ‘Helping to design runners with Judy was always the high point of my work at the studio...Working with Judy on this level, opening, exchanging ideas, mixing colors, and painting side by side, became a comfortable and stimulating experience.’ Schneider worked on the needlework runner for the Saint Bridget place setting, of which she recalled, ‘In working on Saint Bridget’s runner, we ran into a disagreement about translating a Celtic cross on the back. My feelings were in favour of a pierced and carved wooden cross – using this medium would make a place for all those intense religious feelings I’d had inside me all those years. Twelve years of Catholic schooling and my heavy religious childhood had almost been submerged until that day when, looking at symbols for the saints, it all came back. The wooden cross symbolized so much for me. After working on it the entire day, I was upset when Judy decided to change it because another woman said she could knit a cross instead. I felt that it was partly my design as well as Judy’s, and I didn’t want to give up easily; my artistic pride came to the surface. But in such cases Judy had the final say, and I conceded – although not without letting my feelings be known. (Eventually, however, we used the wooden cross.)’

Provenance:
Given by the artist to Kathleen SchneiderPrivate collection, until 2012.