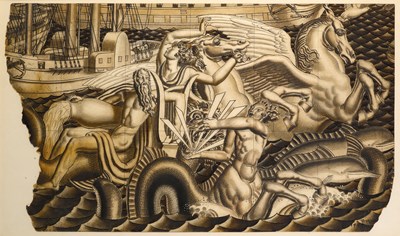 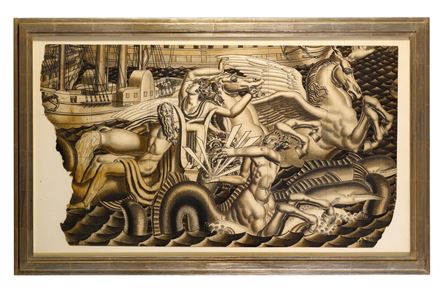 Study for The Chariot of Poseidon Mural for the S.S. Normandie


In 1934 Jean Dupas received his most important commission to date; a series of large glass murals to decorate the Grand Salon of the new French ocean liner, the Normandie. This large drawing is a preparatory compositional study for The Chariot of Poseidon, one of the murals. The most beautiful and luxurious ocean liner of its day, the Normandie was launched in 1932 and made its maiden transatlantic voyage in May 1935. Intended as an exemplar of French engineering and design, the ship’s lavish interiors served as showcase of French Art Deco, incorporating specially commissioned work by such leading designers and craftsmen as Jean Dunand, Emile-Jacques Ruhlmann, René Lalique and Jean-Michel Franck, as well as Dupas.Dupas’s Normandie panels have long been recognized as his finest work. Completed in 1935, the panels for the Grand Salon were in executed on giant glass panels in the technique of verre églomisé, and were the result of a collaboration between Dupas and the glassmaker Jacques-Charles Champigneulle. The four paintings depicted The Chariot of Poseidon, The Sea Nymph Thetis, The Birth of Venus and The Rape of Europa. The present large sheet shows traces of the damage it received in a fire in Jean Dupas’s studio that destroyed much of his work. The first owner of this drawing was the painter Marguerite Grain (1899-1986), a pupil of Dupas who also posed for a number of paintings by the artist.

Literature:
To be included in the forthcoming Jean Dupas catalogue raisonné being prepared by Romain Lefebvre.

Study for The Chariot of Poseidon Mural for the S.S. Normandie