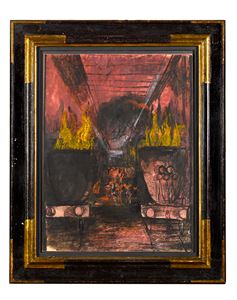 
In 1938 Graham Sutherland’s friend and mentor Sir Kenneth Clark was appointed head of the War Artists Advisory Committee, and he engaged Sutherland as an official War Artist from 1940 to 1945. Sutherland first depicted scenes of bomb damage in London, then turned his attention to studies of industrial production on the home front; tin mining in Cornwall, blast furnaces in South Wales, open cast coal mining and limestone quarrying. Most of his works from this period were acquired by the War Artist’s Advisory Commission and presented to museums around the country.At the end of September 1941 Sutherland was sent to make drawings of the large blast furnaces at the Guest, Keen and Baldwin Steel Works in Cardiff. The artist was fascinated by the almost alchemical processes in steel manufacturing, and by the huge furnaces and crucibles, the molten steel and the red and yellow glow of the huge flames. As Malcolm Yorke has noted, ‘Now all his sunset colours could be deployed again in the flow of molten iron, flames belching from furnace doors, glowing crusts of slag and the plop and seeth of boiling metal...In this dramatic black and red inferno the steel-men risked their lives teeming super-heated metals, feeding the voracious furnaces and tapping the outflow.’ Many years later, in a 1971 interview, Sutherland recalled the sight: ‘As the hand feeds the mouth so did the long scoops which plunged into the furnace openings feed them, and the metal containers pouring molten iron into ladles had great encrusted mouths.’Executed in a rich combination of different media and techniques, this vibrant drawing depicts the process of ‘teeming’ in steel manufacture, namely, the pouring of molten steel into ingot moulds. A very similar composition, drawn in watercolour, wax crayon and black ink and entitled Twin Ladles, was presented by the War Artists’ Advisory Committee in 1947 to the Ashmolean Museum in Oxford. A recent description of the Ashmolean drawing is also relevant to the present sheet: ‘The vivid egg-yolk yellow, carmine and sooty black recalls the work of William Blake...[and] evokes the intense heat and acrid atmosphere of the factory – a visceral assault on all the senses. The bold geometry of the design, emphasised by the grid of the ceiling and the parallel rails in the foreground, is countered by the swirl of the raging flames and the murky smoke.’In later years, Sutherland recalled, ‘I think my war paintings did have a very big effect on me. I was suddenly faced with certain subjects which, as far as painting was concerned, I had had no previous knowledge, and I was, in fact, frightened, simply because I didn’t know how I was going to react. It was a new field entirely and I had to make the best of what I could do, and it undoubtedly had an important effect on me, because clearly nothing one experiences fully is ever wasted. For example, I painted a lot of factory subjects – machinery and the rest – during the war...these vast machines, with violence in the air, later made me see correspondence with the forms in nature. I began to see a curious similarity between machine forms and nature forms. I have always liked and been fascinated by the primitiveness of heavy engineering shops with their vast floors. In a way they are cathedrals. Certainly they are as impressive as most cathedrals I’ve seen and a good deal more impressive than some. And yet the rite – a word I use carefully – being performed when men are making steel, is extraordinary; and how primitive it all really is in spite of our scientific age.’