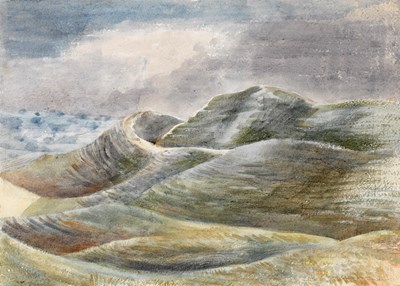 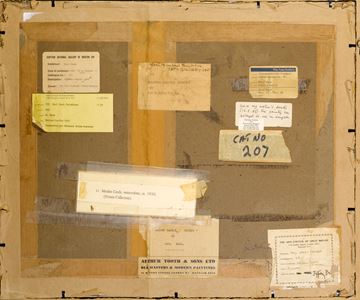 Watercolour, red chalk and pencil on paper. Signed Paul Nash at the lower left. Indistinctly inscribed with colour notes in pencil at the lower right centre. Titled and dated Maiden Castle / (Dorset) / traces for / painting on the verso.289 x 403 mm. (11 3/8 x 15 7/8 in.)


This magnificent late watercolour of Maiden Castle in Dorset was drawn in the early 1940’s, at a time when Nash seems to have preferred watercolour to oil for his landscapes. As Andrew Causey has noted, ‘[Nash’s] late landscape watercolours are a remarkable advance even on those of 1925, which mark the peak of his achievement in this area hitherto. From 1938 his pictures become increasingly relaxed, he worked more in terms of tonal gradation and intensity of colour which grew more vibrant as drawing became less important; some underdrawing in soft pencil or black chalk is usual to the end, but it was employed increasingly to briefly mark out the composition rather than to define forms.’ Maiden Castle is an Iron Age hill fort – one of the largest and most complex hill forts in Europe – situated near the town of Dorchester in Dorset. Nash was greatly inspired by Maiden Castle, a place he adored and venerated. He photographed the site in 1935, when it was being excavated by Dr. Mortimer Wheeler, and wrote about it in his text for the Dorset Shell Guide, published in 1936: ‘Maiden Castle has been described as the largest and most perfect earthwork in the world. To say it is the finest in Dorset is, perhaps, enough, for in no part of any country, I believe – not even in Wiltshire, where Avebury stands – can be found so complete a sequence of hill architecture…The Maiden…is in the form of an irregular oval. Its measurements are 400 yards wide and 900 yards long. The outer circumference amounts to two miles, enclosing an area of 130 acres. It is a phenomenon which must be seen to be believed if you consider that it was constructed throughout a series of occupations, the earliest of which can be ascribed to a period approaching 2000 B.C. Its presence to-day, after the immense passage of time, is miraculously undisturbed; the huge contours strike awe into even the most vulgar mind; the impervious nitwits who climbed on to the monoliths of Stonehenge to be photographed, slink out of the shadow of the Maiden uneasily.’This fine watercolour dates from Nash’s trip to Dorset with his friend Lance Sieveking in September 1943. Sieveking was a Regional Programme Director for the BBC, with Dorset one of the five counties for which he was responsible, and he asked Nash – who had written the Dorset Shell Guide several years earlier – to accompany him on a tour of the county. Together they visited Maiden Castle, Chalbury, Cerne Abbas, Dorchester and the Isle of Portland. In his autobiography, published in 1957, Sieveking recalled that they travelled ‘back and forth, across that beautiful county, in sunny days and warm clear nights, stopping ever and again for Paul to draw, to make notes, to take photographs, and to scan the distance through powerful field-glasses. He said that through field-glasses one sees a landscape that one can see in no other way.’ Shortly after their return, Nash wrote to Sieveking that ‘Looking back over the great voyage to the hills and the heaths and the sea, it seems all a dream but most favourably a dream remembered – and so incredibly varied – I shall never quite get over it…I am pleased with my drawings and have hopes of making something from them.’The present sheet may be claimed as one of Paul Nash’s finest late watercolours. As one scholar has written of the artist, ‘it was as a water-colourist that Nash must be acknowledged to have been supreme, watercolour, the most subtle of all media being entirely suited to the most poetic origins of his imagination. The results that he obtained with it are, however, altogether broader and grander in effect than those normally associated with its use...’