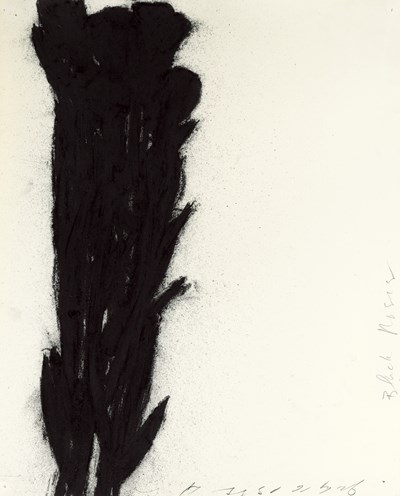 
This drawing may be associated with a series of large charcoal drawings of flowers – tulips and irises in particular – by Donald Sultan, in which the rich, velvety blackness of the medium was essential to the artist’s conception of the whole. As the art historian and critic Roger Bevan has noted, ‘In charcoal, Sultan conjures magnificent forms on large sheets of smooth, heavy etching paper…Boldly carved with sticks of charcoal which splinter and crumble under the pressure which he applies, these elemental shapes are provocatively sensuous, their contours softly dusted with powder…his masterly fusion of a deposit of charcoal upon the surface of a crisp, clean sheet of paper recalls those incomparable drawings of Seurat whose control of crayon as it caressed the paper’s tufts has never been surpassed. The common thread which binds these artists to a galaxy of other European masters is a love of the colour of blackness and nobody has explored its special characteristics as obsessively as Sultan.’ This charcoal drawing may also be related to a later series of three aquatints of Black Roses, executed by Sultan in December 1989 and published in 1990. In a survey of Sultan’s printmaking, Barry Walker noted that ‘Any consideration of Sultan’s unique work is incomplete without an examination of his drawings. They are also essential in any discussion of his aquatints, the most innovative aspect of his printed oeuvre, as the development of technique in each is inextricably related to the other. The drawings comprise an independent body of work rather than studies for paintings; they are mostly large-scale and highly finished. In the earlier ones he employed some graphite with charcoal, but the more recent ones, those executed since late 1983, are done in pure charcoal on paper.’Sultan was inspired to use the aquatint process as a way of approximating the appearance of his charcoal drawings. As the artist has recalled, ‘I got the idea of making the prints from the charcoal drawings. I worked the charcoal a lot as powder, let it spread out over the paper, and then fixed it. One day I thought, ‘Aquatint is already powder, so if you work it dry and don’t melt it until you’ve made the images, instead of doing the reverse, you won’t have hard edges…I realized that I couldn’t get the charcoal drawings as powdery as I wanted them. With charcoal you’re adding, so you develop a technique to get your whites clean and your edges fuzzy. It gets really fussy. But with the prints it’s the reverse. In the aquatints, I solved the problem of how to make mysterious, intimate drawings without having to fuss with the damn thing.’