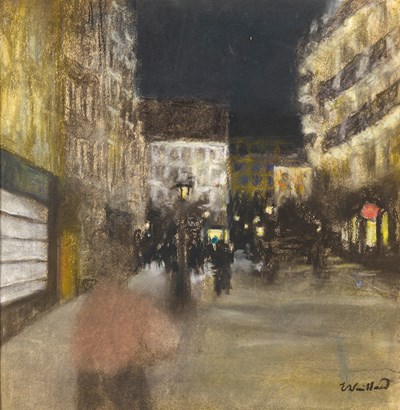 A Parisian Street at Night Sold


As Guy Cogeval has written, ‘Like most artists born in the provinces, Vuillard was a confirmed lover of Paris...His discovery of new realities, the broadening of his wide culture, his ever-alert intellectual curiosity – all were bound up with his growing love of strolling through the city...His continual walks through Paris, his almost metronomically obsessive observation of the slightest detail that “shimmered” in his mind, opened up many perspectives.’ This atmospheric pastel of a Parisian street scene at night is typical of the artist’s abiding interest in the streets of the city. Night scenes are relatively rare in Vuillard’s oeuvre, however. This pastel may be grouped with a handful of similar oil sketches of urban nocturnes, which can be dated between 1895 and 1897. Particularly close to the present sheet in mood and effect is an oil sketch of a Night Scene in a private collection in France, while also comparable are a painting of The Place du Palais-Royal at Night in an American private collection and a sketch of The Place de Clichy in the Fondation Bemberg in Toulouse. As has been noted, with reference to a similar nighttime scene by the artist, ‘Vuillard manages to conjure up, on a tiny surface a captivating nocturne. His relationship to the night is nothing if not tractable; his walks through Paris at night, alone or with friends, were crucial to him throughout his life.’ This pastel nocturne was acquired from the artist by the Comte and Comtesse Jean de Polignac. As the Comtesse Marie-Blanche de Polignac was later to recall, ‘We had bought, for ourselves, a small Vuillard pastel depicting a Paris street scene at night. We foolishly exchanged it for a larger but less delicate canvas: Young Girl in White, Rue de la Tour.’ A opera singer and the only daughter of the couturier Jeanne Lanvin, Marie-Blanche de Polignac was the subject of a large portrait painted by Vuillard between 1928 and 1932, today in the collection of the Musée d’Orsay in Paris.

A Parisian Street at Night