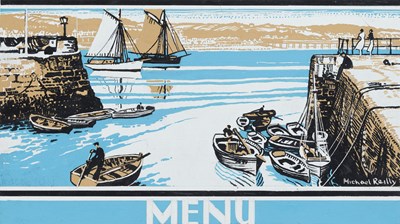 
The harbour at Paignton, on the western shore of Tor Bay in Devon, was established in the 18th century, and remained for many years a thriving fishing port. Another design by Reilly for a Great Western Railway menu card, depicting a view of Newquay in Cornwall and datable to c.1930, is today in the collection of the National Railway Museum in York. The present sheet was part of the extensive collection of railway memorabilia - including posters, artwork and archives, with a particular emphasis on the Great Western Railway - assembled by the late Malcolm Guest (1943-2009).