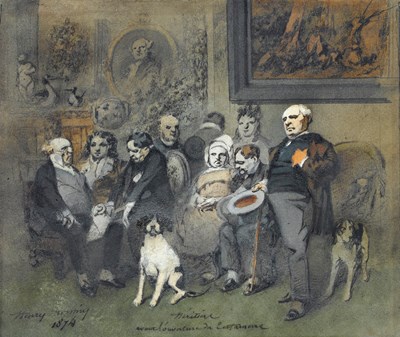 Before the Reading of the Will Sold


Referring to the artist’s drawings and lithographs, a modern biographer has noted that ‘Monnier's style has certain easily recognizable traits which distinguish his work from that of his contemporaries...There is a conspicuous lack of grace in his personages; they are drawn with heavier lines than the figures of Eugene Lami, for instance, or of Gavarni; they are solidly planted on their feet, their bodies are short and stocky. They are clothed with almost photographic veracity, with minute attention to the details which are appropriate to their social status. But the most remarkable thing about them is the way in which Monnier made them live: the vivacity and variety of their facial expressions, and the precision, appropriateness, and restraint of their gestures…The setting in which the characters appear is presented with the same accuracy of detail. Compared with the caricatures of Travies or Grandville, or the deadly irony of Daumier's studies of manners, Monnier's work is unmistakably closer to everyday life. It is in the composition of his scenes, however, that he rises above reality to a height of comic art that is peculiarly his own…Monnier made of his drawings genre pictures in which the figures are subordinated to the setting as they are in certain seventeenth-century Dutch paintings…The result is an admirable evocation of that middle-class world Monnier was interpreting, with its petty preoccupations and stunted aspirations.’

Before the Reading of the Will