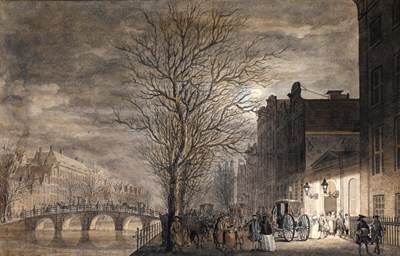 A View of the Keizersgracht in Amsterdam, with Figures Leaving the Stadsschouwburg Theatre


Writing in 1817, the Dutch biographer and collector Adriaan van der Willigen noted of Reinier Vinkeles that ‘Among his early drawings, those in color depicting the entering and exiting of the Amsterdam Theater stand out.’ This sheet is one of the earliest and largest of a number of drawings by Vinkeles of figures outside the theatre on the Keizersgracht canal in Amsterdam. One of the first theatres in the city, the Duytsche Academie was founded in 1617 by Samuel Coster, and established in a wooden building on the Keizersgracht. In 1632 the architect Jacob van Campen was commissioned to design a new building for the theatre, now known as the Schouwburg, which over the succeeding years hosted performances of plays by Shakespeare, Voltaire, Corneille and Moliere, as well as numerous works by Dutch playwrights. (In the present sheet, the poster on the wall by the entrance to the theatre advertises the play Le Cid by Pierre Corneille, first published in 1636 and a huge popular success.) The theatre was rebuilt and significantly enlarged in 1665, to a design more in keeping with the Baroque manner. In 1737 Antonio Vivaldi conducted the theatre’s orchestra, and illustrious visitors to the theatre included the Prince of Orange, the Czar of Russia and the King of Poland. In May 1772, twelve years after the present sheet was drawn, the theatre was completely destroyed by fire. The site was acquired by the Old and Poor People’s Office, a charitable foundation of the Catholic church, which retained possession of the building until 1998. The site is now a luxury boutique hotel, whose Michelin-starred restaurant is named The Vinkeles, in honour of the artist.Vinkeles seems have made several finished versions of a pendant pair of scenes – of various sizes and each with different staffage - of the Stadsschouwburg on the Keizersgracht canal; one with figures arriving at the theatre in daylight and the other with people leaving the theatre at night. In the drawings of figures arriving at the theatre, Vinkeles has placed the scene in summer, with the trees in full foliage and the artist looking north with the canal at the right, while the nighttime scenes are depicted in winter, with the trees bare and the canal at the left, viewed from the opposite direction. A pair of such views, considerably smaller than the present sheet, appeared at auction in Paris in 1999 and are today in the collection of the John and Marine van Vlissingen Art Foundation in the Netherlands. This pair of watercolours by Vinkeles, each measuring 185 x 250 mm., are signed and dated 1760 (the night scene, with the same composition as the present sheet) and 1761 (the daylight scene). Both sheets are also inscribed ‘Gezigt van de Keyzers graft & Amsteldamsche Schouberg 1760’. A slightly later pair of views by Vinkeles of the same scene on the Keizersgracht, dated 1762 and also smaller in dimensions than this drawing, are in the collection of the Gemeente Amsterdam Stadsarchief, the municipal archives in Amsterdam. The popularity of such topographical views of the Keizersgracht by Reinier Vinkeles is reflected in the fact that the motif of crowds entering and leaving the theatre was later adopted by other artists, including Hermanus Petrus Schouten and Dirk Verrijk.

A View of the Keizersgracht in Amsterdam, with Figures Leaving the Stadsschouwburg Theatre