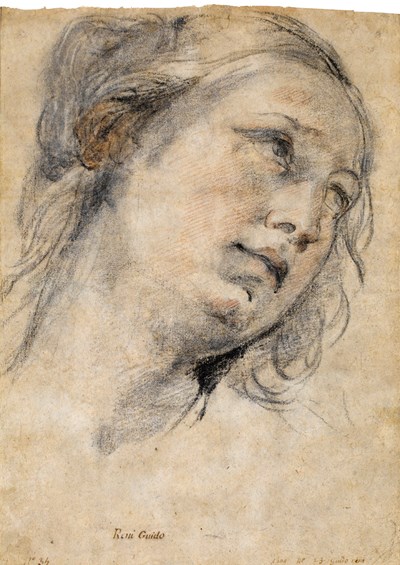 The Head of a Young Woman Looking Upwards Sold


Guido Reni often produced individual, large-scale chalk drawings of heads as studies for the figures in his paintings. The present sheet was first published, as a work of Reni’s Roman period, by the late Stephen Pepper in 1981, and the attribution has since been confirmed by Babette Bohn and other scholars. While the drawing is not related to any surviving work by the artist, Pepper suggested that the 17th century inscription ‘Raccolta di S.M.G. San Germano’ on the old backing sheet may refer to a certain Bartolo di Villa San Germano, a figure mentioned in an interesting passage in Malvasia’s biography of Reni. As Malvasia relates, ‘Guido also gave works by his hand to whomever he found pleasing, and whomever, by showing they were disinterested, won him over...[including] a very lovely little Madonna for a certain Bartoli of Villa di S. Germano in the diocese of Rimini, a very handsome robust old man 105 years old, whose venerable head Guido painted a good eight times; but the painting was wickedly taken away from him by a gentleman in the Roman countryside, where he, Bartoli, was showing it to everyone and receiving incredible alms for it.’ The present sheet may perhaps be related to this now-lost Madonna, although this can only be conjecture. Alternatively, Pepper proposed that the drawing may have been a study for a fresco, as the precise technique and defined contours of the sheet would suggest. (In a letter of 1993, Pepper reiterated his conviction that the present sheet was intended as a study for an unknown fresco project by Reni, further noting that ‘the feathery touch of the shading around the nostrils and the cheeks [is] typical of the master.’) The date of 1609 inscribed on the sheet is in keeping with the period of Guido Reni’s most frequent use of the fresco medium and, if correct, would make the drawing one the few studies that survive from this phase of his career. The scarcity of early drawings by Reni, however, complicates any attempt to establish a definitive dating of the present sheet to this period. Catherine Johnston has, however, tentatively noted some similarities between the head in the present sheet and that of the allegorical figure of Night, albeit in reverse, in a ceiling fresco by Reni of The Separation of Night and Day - an early work variously dated between 1599 and 1604 - painted for the Palazzo Zani in Bologna and now at Kingston Lacy House in Dorset. The physiognomy and pose of the head in this drawing is, as Aidan Weston-Lewis has further pointed out, also very close to that in a painting by Reni of Lucretia that is known in at least two autograph versions, including one in a private collection in New York and another in an Italian private collection. It is also close to the head of the Magdalen in Reni’s painting of The Penitent Magdalene of c.1627-1628 in the collection of the Musée des Beaux-Arts in Quimper.

The Head of a Young Woman Looking Upwards