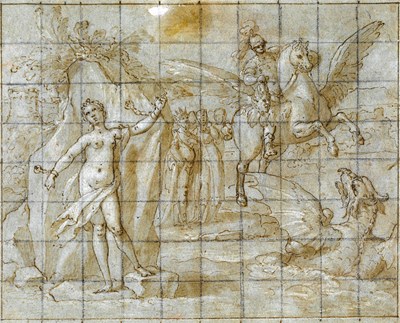 
Most of Bernardo Castello’s drawings are executed in pen and brown ink, often on blue paper, and the present sheet is a fine and typical example of his draughtsmanship. Drawings such as these seem to have been popular with collectors and friends of the artist. In September 1591, for example, one of the Castello’s close friends, the poet Gabriele Chiabrera, wrote to him requesting a selection of his drawings on blue paper: ‘queste cose io le voglio in penna sopra carta azzurra e con tutta quella vostra minore fatica di mano e d'ingegno che sia possibile.’This drawing has been dated by Mary Newcome Schleier to the 1590’s. Although squared for transfer, it remains unrelated to any surviving painting or fresco by Castello. It may be noted that the theme of Perseus and Andromeda is rare in Genoese art of the late 16th century, and Castello may have been inspired by his teacher Andrea Semino’s fresco of the subject, painted in the mid-1560’s for Palazzo Doria in Genoa which, however, differs in composition.A stylistically comparable drawing by Bernardo Castello of The Abduction of Oreithyia by Boreas in the collection of the Musée des Beaux-Arts in Orléans.