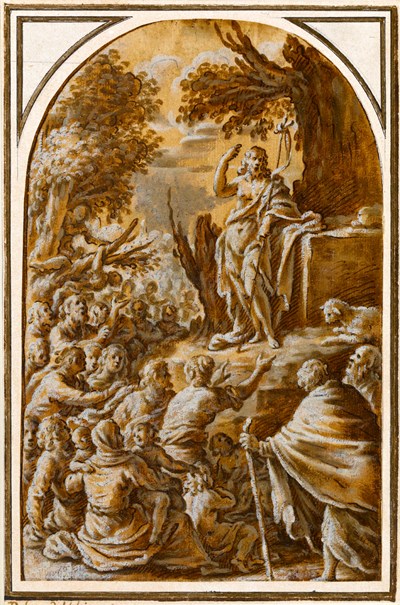 The Preaching of Saint John the Baptist Sold

Pen and brown ink and brown wash, heightened with cream oil paint on paper with an arched top, laid down on a Calvière mount. Inscribed (by Calvière) Palma. Vechio.- twice (once partially cut off) on the mount.196 x 126 mm. (7 3/4 x 5 in.)


A large group of oil sketches on paper by Bassetti, similar in technique to the present example, is in the Royal Collection at Windsor Castle. In his catalogue of that collection Anthony Blunt provided a succinct description of Bassetti’s distinctive draughtsmanship: ‘His drawings are executed in the late sixteenth-century Venetian method of almost grisaille oils on paper, but they are characterized by a type of closed composition, with the figures crowded into the front of the space, and by a method of modelling the form in little lumps or nobs, emphasized by the strong highlights added in pure white pigment. The ‘ropy’ treatment of the draperies combines with this to create a curiously broken high-relief pattern of lights and shades’. The artist himself seems to have regarded his drawings as akin to his paintings, to judge by his comment, in a letter of 1616 to Palma Giovane, that ‘quanto si disegna, si dipinge ancora’ (‘when one draws, one also paints’).Bassetti’s oil sketches on paper, of which the present sheet is a very fine and fresh example, seem to have been done not as studies for paintings but were rather intended as independent works of art. That they were highly prized by collectors, and particularly foreign visitors to Verona, is seen in a comment made by his biographer, Carlo Ridolfi. In his Le maraviglie dell’arte, published in 1648, Ridolfi praised Bassetti’s drawings, ‘which he used to heighten with white and black oil paint on the paper’, and noted that ‘one still sees many drawings executed in this manner and which he mostly made during the winter, displaying them around his studio, and which he still used to sell to those who took delight in studying, and in particular to the foreigners who passed through Verona.’The present sheet was part of the collection of drawings belonging to Charles-François de Calvière, Marquis de Vézénobres (1693-1777). A friend and contemporary of such 18th century collectors and connoisseurs as Pierre Crozat, the Comte de Caylus, Charles Coypel and Pierre-Jean Mariette, Calvière assembled the bulk of his collection between 1720 and 1760, although he continued to acquire drawings until his death. Almost all of Calvière’s collection, including 459 lots of drawings, was dispersed at auction in Paris in May 1779. The present sheet was, however, among a small number of drawings which were not included in the 1779 sale and which remained in the possession of the collector’s heirs until 2003.

The Preaching of Saint John the Baptist