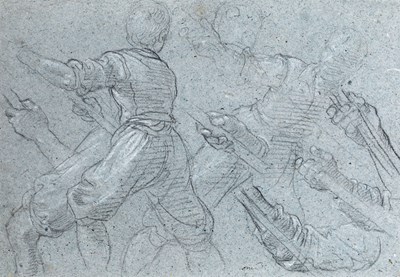 Black chalk, heightened with touches of white chalk on blue paper. A faint study of the main figure repeated in black chalk on the verso. Signed(?) lomi at the bottom centre. A made up section at the lower left corner.200 x 301 mm. (7 7/8 x 11 7/8 in.)


Aurelio Lomi’s charming drawings take the form of preparatory figure studies for paintings, and many of these can be connected with surviving works by the artist, dating between 1597 and 1619. In general, Lomi’s practice was to draw compositional studies in pen and ink, while using black chalk for studies of individual figures and motifs. The present sheet is a typical example of the latter, and displays the artist’s characteristic habit of repeating studies of parts of the figure on the same sheet. Also typical of Lomi’s drawing practice is the use of coloured paper. While it has not proved possible to relate the two figures in this drawing to any surviving painting by the artist, it may be noted that the pose of the right-hand youth is similar to that of a man throwing a stone in Lomi’s painting of The Martyrdom of Saint Stephen, today in the Galleria del Palazzo Bianco in Genoa. Among stylistically comparable drawings by Lomi are a drawing of four studies of a youth in the Musée des Beaux-Arts in Rouen, which is preparatory for an altarpiece of the Adoration of the Magi, painted between 1600 and 1604 and today in the Galleria Sabauda in Turin, and a drawing of a man seen from behind, in a private collection in Paris, which is a study for a painting of Saint Francis Curing a Blind Man of 1611-1614 in Pisa. Also similar are two double-sided drawings of figure studies, one in the Louvre and the other in the British Museum, both of which are studies for a painting of The Feast of Ahasuerus in the Duomo in Pisa, painted by Lomi between 1610 and 1617. An identical signature or inscription ‘lomi’ is found on a double-sided chalk drawing in the Kupferstichkabinett in Berlin, which contains studies for Lomi’s 1610 altarpiece of Christ Healing the Blind Man, also in the Duomo in Pisa.

Studies of Youths Pulling on Ropes