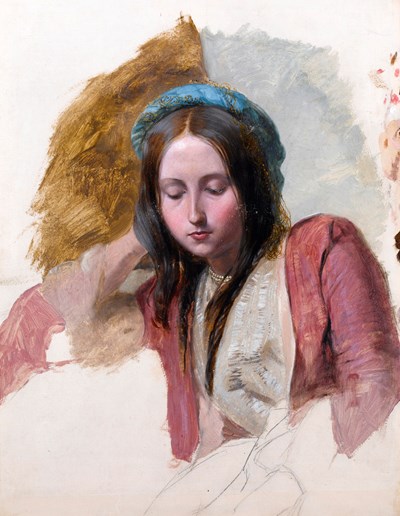 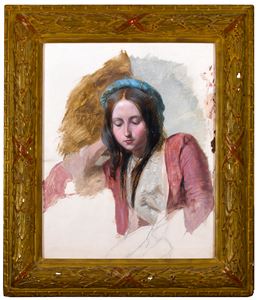 Study of a Young Woman in Eastern Costume Sold


The present sheet would appear to depict an Englishwoman dressed in Oriental costume, rather than representing an actual portrait of a woman of Eastern origins. Despite the evidently high quality of the work, its attribution has remained a mystery. Although a tentative attribution to John Frederick Lewis was once put forward, this oil sketch is arguably more likely to be by an artist with little or no direct experience of the Near East.Referring to the present work in a letter of 1997, the Lewis scholar Michael Lewis noted that, while the technique of oil on paper is not found elsewhere in the oeuvre of John Frederick Lewis, the draughtsmanship has some affinities with other works by him, and he advanced a somewhat hesitant attribution to the artist. However, Briony Llewellyn has recently confirmed that the present work is not by J. F. Lewis.An attribution to the little-known English painter Francis John Wyburd (1826-1909) has been suggested. Active between 1845 and 1893, Wyburd was a portraitist and painter of genre, historical and literary subjects. He made a particular specialty of paintings of young woman in languid poses, often in an Eastern setting. He exhibited a number of paintings, of such subjects as women lounging in a harem, at the Royal Academy, the Society of British Artists and the British Institution. One contemporary critic noted of the artist that ‘The characteristics of Mr. Wyburd’s art are, principally, a perfect realisation of female beauty, an attractive manner in setting out his figures, and a refinement of finish which is sometimes carried almost to excess.’

Study of a Young Woman in Eastern Costume