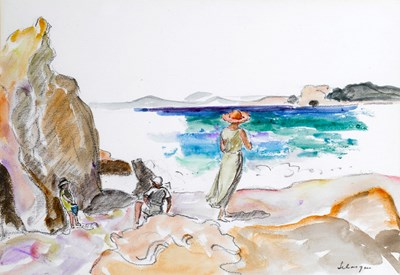 A Family at the Seaside Sold


The present sheet, a fine example of Lebasque’s watercolour technique, almost certainly depicts members of the artist’s family. His wife Ella and three children - two daughters named Marthe and Nono (christened Hélène) and a son Pierre - appear in many of his works. As has been noted of the artist, ‘He achieved an intimate manner of painting those scenes and people most dear to him, which was replete with his personal delight in form and color, and heightened by his contact with fellow painters Matisse and Bonnard, but characteristically his own.’ In an interview conducted in 1985, the artist’s daughter Marthe recalled that Lebasque was happiest when working in the South of France: ‘I remember Saint Tropez, Sanary, the sunny south of France. My father adored working there. It was his friend [Henri] Manguin who advised him to go there, it was there that my father had the revelation that he was fascinated by the landscapes and the atmosphere that prevailed...The Parisians said to him, ‘You are mad, one doesn’t go there in the summer, it is too warm, wait until the winter...’ But he went there with his friends Signac, Luce, Matisse, Manguin...They painted these marvellous landscapes, and they sought each other out to tell of the places that they had discovered. A great sweetness of life reigned there...’.

Literature:
Lisa A. Banner and Peter Fairbanks, Lebasque 1865-1937, exhibition catalogue, San Francisco, 1986, p.91, no.66, illustrated in colour; To be included in the forthcoming Lebasque catalogue raisonné by Denise Bazetoux.

A Family at the Seaside