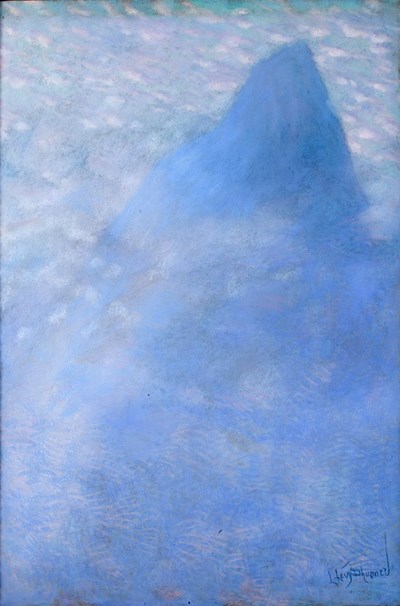 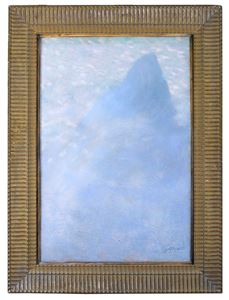 
Among Lévy-Dhurmer’s landscape paintings and pastels, studies of mountains are particularly prominent. A large mountain view, commissioned for the home of a private collector in Paris, was sent by the artist to the Salon de la Société Nationale in 1911, while at the Salon des Pastellistes Français the following year he exhibited four Impressions de montagnes, This very large and impressive pastel landscape is a view of the Dent du Chat, a mountain peak - rising to nearly 1,400 metres - above Aix-les-Bains on the western edge of the Lac de Bourget, in the département of Savoie in the French Alps. Lévy-Dhurmer visited the region in 1925 and 1935, and the present pastel is likely to date from the first of these trips. Another pastel view by Lévy-Dhurmer of the Dent du Chat, of horizontal dimensions and with the mountain viewed from a greater distance, was in a private Parisian collection in 19733. A pastel view of a rainbow over the Lac de Bourget may also be dated to the same period as the present work, while another stylistically comparable pastel landscape is a view of Lac Léman, dating from 1925, which was recently acquired by the Musée d’Orsay in Paris. Philippe Saunier’s incisive comments on the large Musée d’Orsay pastel of Lac Léman may equally be applied to the present sheet, with which it shares many characteristics: ‘In Savoie in 1925, and again in 1935, the artist executed a series of landscapes: of Lakes Léman, Bourget and Garda. The use of pastel permitted an absolute poetic transformation of the scenery. The delicate and powdery medium confers a tremulous, misty atmosphere in which all detail disappears. Reality gives way to the sublime by virtue of blurring the parameters between water, earth and sky and merging their properties. This communion of elements creates a climate of mystery...the incredible variations of blue – the colour of spirituality – in this landscape falls into the lineage of Whistler. In his own way, the artist ventures to the edges of representation and seems to explore the virtues of colour for colour’s sake, of which the monochromatic is the ultimate outcome.’