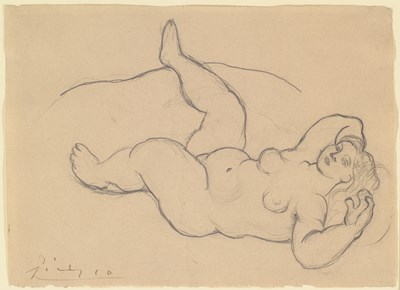 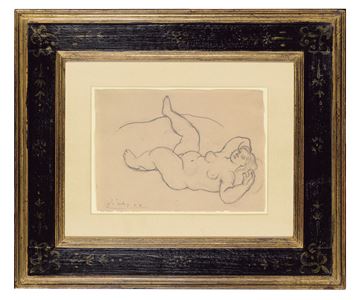 
Unknown to Christian Zervos when he published his monumental catalogue raisonné of Picasso’s work, this drawing is closely related to, and may be a preliminary study for, a sleeping peasant woman in La sieste (Les moissonneurs), a highly finished drawing in tempera and watercolour, executed in August 1919 and today in the collection of The Museum of Modern Art in New York.The present sheet underscores Picasso’s close study of the paintings and drawings of one of the greatest French draughtsmen of the previous century, Jean-Auguste-Dominique Ingres, whose work was to be a lifelong touchstone for the Spaniard. As Susan Grace Galassi has noted of the equivalent figure in the finished gouache, ‘The posture of the female peasant brings to mind the foreground figure with arms above her head in Ingres’s Turkish Bath, as well as sources in antiquity, particularly the prototypical figure of the maenad with her head thrown back – a symbol of unbridled sexuality – which would reappear in many works in his Surrealist period in the 1920s and 1930s.’ Similarly, Rubin has noted of the final composition that ‘Sleeping Peasants reflects an aspect of Picasso’s study of Ingres quite different from that which we see in many of his classical line drawings. Here, in the foreshortened head and upper torso of the woman’s figure there are mannered effects reminiscent of the French painter’s late style…But the effect of Picasso’s drawing is more monumental, and in that respect this small gouache anticipates his more colossal “Roman” or “Pompeiian” figures of the early twenties.’ Throughout his career, and particularly in his drawings, Picasso would look to Ingres as an exemplar, an inspiration and, at times, a rival, to be challenged and outdone.A handful of drawings by Picasso have been related to the Museum of Modern Art gouache. A closely related drawing of a nude woman in an identical pose, drawn in pen and ink and of identical dimensions to the present sheet, was formerly in the collection of Jacques Sarlie in New York and was sold at auction in 1960. Two pencil studies for the composition of La sieste are also known; one in the Arkansas Art Center Foundation in Little Rock, Arkansas and the other in a private collection. A later watercolour variant of the composition of the finished gouache - dated January 14th, 1921 - was formerly in the Lewyt collection and was recently sold at auction in New York.This little-known drawing was acquired from Picasso by the German art dealer Hugo Perls (1886-1977), who established the Käte Perls Gallerie, named for his wife, in Berlin in the early 1920’s. In 1931 he moved the gallery to Paris, where he continued to deal in the work of Impressionist and Modern masters. In 1941 he settled in New York, where his son had established a gallery a few years earlier. By the early 1940’s this drawing had entered the collection of the publisher and collector Lee Ault (1915-1996), who owned several works by Picasso.