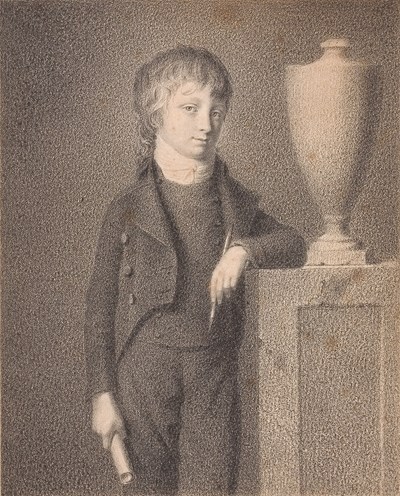 
The Dutch inscription on the backing board identifies the sitter as Daniel Gerrit des Tombe, born in October 1787 and thus aged twelve or thirteen when the drawing was made. The inscription in full may be translated as:‘In the year 1800Daniel Gerrit des Tombe born on 5 October 1787 Son of Arnoldus des Tombe and lady Henrietta Anna de Bont. Portrayed by mister Jacob. First [pupil] of the Painters Academy in Brussels.’The draughtsman ‘Heere Jacob’ may be tentatively identified as the Flemish artist Pierre François Jacobs (1780-1808), very little of whose work survives today. Born in Brussels, Jacobs was a pupil of André Corneille Lens at the Academy there. He won several prizes for drawing and painting in Brussels and Ghent, and after completing his studies settled in Italy. Jacobs developed a reputation as a painter of historical and religious subjects, mostly in a Neoclassical vein, as well as portraits. In 1806 won a prize at the Accademia di San Luca in Rome. His promising career was cut short by his death in Rome at the age of twenty-eight, shortly after winning the grand prize at the Accademia in Milan with a painting of The Head of Pompey Presented to Caesar.