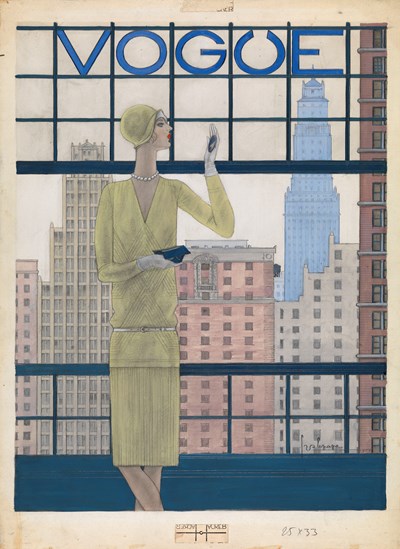 Design for the Cover of Vogue Magazine (May 1928) Sold


Georges Lepape produced a total of 114 covers for Vogue, the first appearing in October 1916 and the last in May 1939. Some of his cover illustrations were used for two or sometimes three different copies of the magazine, which was published in American, English and French editions. As Packer has noted of Lepape, ‘From the first his covers for Vogue were models of refinement, simplicity and visual wit...Seen as a whole this body of work stands as a splendid and remarkable achievement, a sustained demonstration of graphic resource, invention and technique of a very high order indeed.’ The decade of the 1920’s found Lepape at the peak of his success at Vogue, completing over seventy cover designs for the magazine. As the artist’s son later recalled, ‘the covers Lepape prepared for Vogue were more than a series of ravishing images. They were a succession of surprises, each new one as delightful as the last...He used to ring the changes with different letter-forms and type-faces, and each time seemed to enjoy the private joke that he was launching a brand new magazine! Readers looked forward to their next issue of Vogue with all the more pleasure since they knew it would look different every time.’The present drawing was used for the covers of both the New York and London editions of Vogue of May 1st and 2nd, 19284. As the authors of an illustrated survey of Vogue magazine covers have noted of the present design, ‘The motif of the Manhattan skyline observed through the tall window of a towering apartment block was a theme that recurred in Vogue’s covers, twice in 1928 alone. Pierre Mourgue’s – from exactly the same vantage point – predated this more elegant Lepape cover by just over a fortnight. Lepape’s exaggeratedly elongated model wears the dropped-waist silhouette popularised first by Chéruit and then by Chanel. That she is adroit is irrefutable (few finessed make-up with gloved hands); that she is also audacious is borne out by the plunging v-line of her décolleté, unthinkable in Vogue even a few years earlier.’Referring to such stylish drawings as the present sheet, William Packer has written that, ‘Never seeking to do more than decorate the surface he was given, and appropriately and charmingly indulge his wit, Lepape produced nevertheless, time after time, memorable and striking images that may now be seen to be rather more than mere period pieces, ripe for fashionable revival.’

Design for the Cover of Vogue Magazine (May 1928)