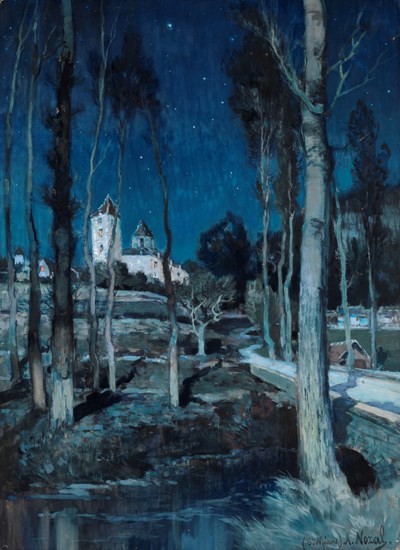 The Benedictine Abbey of Saint-Médard in Soissons, in the Moonlight Sold


According to the Salon stamp on the backing board, this large watercolour was exhibited at the Salon de la Société des Artistes Français in Paris in 1895, the same year that the artist was admitted to the Légion d'Honneur. The drawing does not, however, appear in the Salon catalogue of that year, and may have been exhibited hors-catalogue.Once one of the greatest Benedictine monasteries in France, the abbey of Saint Médard at Soissons, in the Picardie region, was founded in 557. It was among the wealthiest abbeys in the country until the 16th century, when its resources were drained by the Wars of Religion. Restored in 1637, the abbey never regained its former status or riches, however, and was dissolved during the French Revolution. Much of the building had fallen into ruin by the beginning of the 20th century, and only the 9th century crypt still remains today.

The Benedictine Abbey of Saint-Médard in Soissons, in the Moonlight