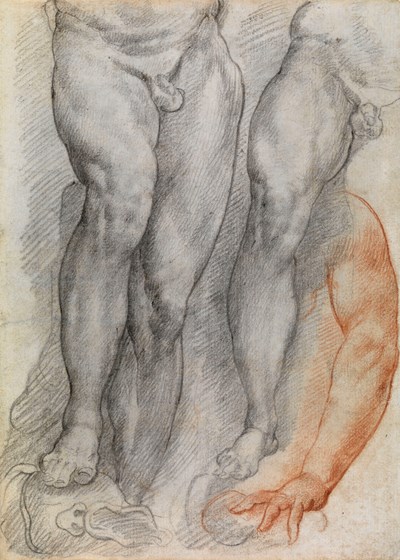 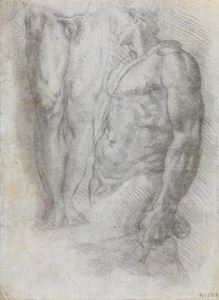 
This interesting sheet of studies would appear to be after an Antique or Renaissance sculpture, and indeed the position of the legs in this drawing is very close to the Hellenistic sculpture known as the Dancing Faun in the Uffizi. Although the first written reference to the sculpture dates from 1665, there is some evidence that it may have been known as early as the middle of the 16th century. Cherubino has here altered the pose of the figure to become David standing atop the severed head of Goliath.Cherubino Alberti produced several drawn copies after the work of earlier artists, often in a combination of red and black chalk, and a number of stylistically comparable drawings of this type by him are found in an album of drawings by various members of the Alberti family, today in the collection of the Istituto Nazionale per la Grafica in Rome. Similar studies of arms are also found in a sketchbook of drawings by Cherubino Alberti, was sold at auction in London in 1976.The verso of the present sheet is a counterproof. In preparation for an engraving, Cherubino would often make a counterproof of a figure he had drawn, in order to study the pose as it would appear in the finished print.