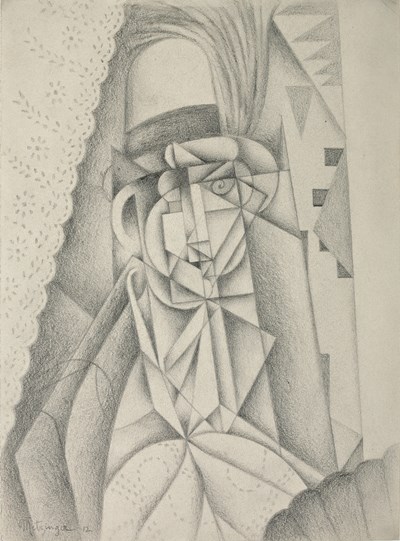 
The present sheet is closely related to Jean Metzinger’s large painting The Yellow Feather, a seminal Cubist canvas of 1912, which is today in an American private collection. The painting was one of twelve works by Metzinger included in the Cubist exhibition at the Salon de La Section d’Or in 1912. One of the few paintings of this period to be dated by the artist, The Yellow Feather is regarded by scholars as a touchstone of Metzinger’s early Cubist period. Drawn with a precise yet sensitive handling of fine graphite on paper, the drawing repeats the multifaceted, fragmented planes of the face in the painting, along with the single staring eye, drawn as a simple curlicue.The Yellow Feather was one of several Cubist paintings depicting women in fashionable clothes, and with ostrich feathers in their hats, which were painted by Metzinger in 1912 and 1913.