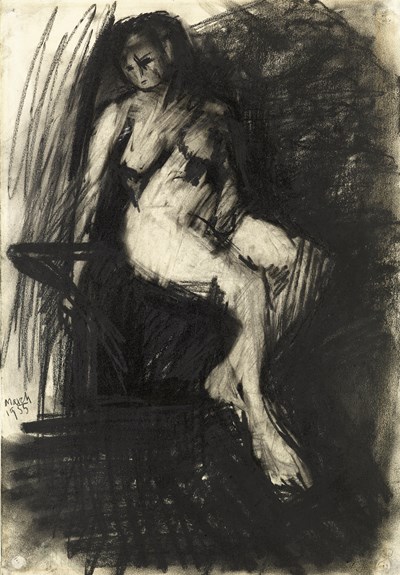 
Frank Auerbach used such large-scale life drawings as the basis for his earliest works as a printmaker; a series of six small drypoints of female nudes, dating from about 1954, when he was about to graduate from the Royal College of Art. As the artist later recalled of these prints, ‘These were all based on life drawings done at the College of Art or at the Borough Polytechnic. I chose six drawings which were still fairly fresh in my mind, out of several hundred (the vast majority of these drawings I later destroyed).’ Drawn in March 1955, the present sheet depicts Estella (‘Stella’) West, posed for the artist for over twenty years. ‘E.O.W.’, as she is invariably titled in his paintings, was the artist’s principal model at the beginning of his mature career. Fifteen years older than Auerbach, she became his lover, and posed for him continuously until 1973, when their relationship ended. A closely-related drawing, of the same date and dimensions, is in a private collection (Catherine Lampert, Frank Auerbach: Speaking and Painting, London, 2015, illustrated p.43).The film director Clive Donner (1926-2010) was a lifelong friend of Frank Auerbach, and acquired the present sheet from the artist soon after it was drawn. This drawing remained in Donner’s collection, little known to scholars, for over fifty years, until his death in 2010.

Provenance:
Acquired from the artist in the 1950’s by Clive Donner, London.

Study of a Seated Female Nude