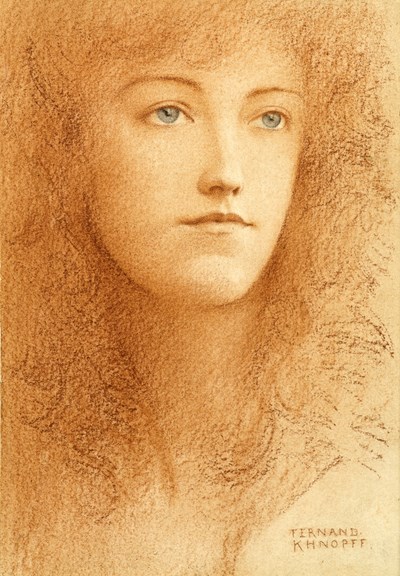 
Like many of his fellow artists, Fernand Khnopff was something of an Anglophile. He spoke English fluently, and made annual visits to England, beginning in 1891. Long interested in English art and culture, he was an avowed admirer of the Pre-Raphaelites, particularly the work of Rossetti and Burne-Jones. Khnopff often gave English titles to his exhibited paintings, while several other works – paintings, drawings and sculptures - were given such titles as Un profil anglais, Une jeune fille anglaise, Un masque de jeune femme anglais and Une tête de femme anglaise. Khnopff also exhibited frequently in London, notably at the Society of British Pastellists, and regularly contributed essays and reviews to the English journal The Studio between 1894 and 1914.It was through his familiarity with the British community in Brussels that Khnopff met the Maquet family, who were of Scottish origins and lived in the quartier Léopold of the city. The pale skin, long hair and striking eyes of the three Maquet daughters – Elsie, Lily and Nancy – epitomized the artist’s ideal of feminine beauty. From 1891 onwards, following the marriage of his sister Marguerite the previous year and her subsequent move to Liège, Khnopff often used the three Maquet sisters as models. The present sheet is likely to be a portrait of Elsie, the eldest Maquet daughter, who was born in Glasgow in 1868. With her long red hair, Elsie Maquet posed for several significant paintings and drawings by Khnopff. These include two works inspired by a poem by the English poet Christina Rossetti; the painting I Lock the Door Upon Myself, today in the Neue Pinakothek in Munich, and the finished pastel drawing Who Shall Deliver Me? in a private collection; both works were completed in 1891. Elsie Maquet also served as the model for the painting A Blue Wing of 1894, today in a private Belgian collection.A recent addition to the corpus of drawings by Khnopff, this remarkable study may be dated to between 1898 and 1900. (The artist lived with his parents on the rue St. Bernard in Brussels – the address inscribed on the old backing board of this drawing – between 1888 and 1901.) It can be associated with a group of portrait drawings in red chalk made by Khnopff around the turn of the century, in which the medium is handled with a particular delicacy and sensitivity. The faces of the women depicted in these drawings exhibit a trancelike aspect, and in several instances the artist has added touches of blue chalk to emphasize the subject’s eyes. As has been noted of the red chalk drawings of this period, ‘The portraits finished in this technique enchant with their fineness and the musicality of the lines. The facial features of the women appear like gossamer on the paper. The fragility of these faces has something seductive about it.’It was also at about this time that Khnopff developed a characteristic composition for many of his paintings and drawings of women, in which the model’s head is cut off at the top and sides by the edges of the paper or canvas, or by a framing device, and placed close to the picture plane, so as to focus the viewer’s attention on the face. This emphasis on a woman’s face also suggested a mask - a central motif of Symbolist art – behind which was hidden the true nature of the subject.Geneviève Monnier’s remarks on Khnopff’s use of pastel and coloured chalks, either separately or in combination, may be seen as particularly apposite in the example of this striking drawing. As she writes, ‘Coloured crayons offered a more precise, more delicate medium, the paler colours calling for a more meticulous treatment, while pastel offered greater intensity in terms of line, colour and grain. In fact, one of the characteristics of Khnopff’s work is this special grainy texture in the colouring medium, obtained without making use of the grain of the paper surface as Seurat did in his drawings. His method resembled pointillism, the pastel strokes just touching the paper. Khnopff’s colour schemes often play on melancholy harmonies of white, grey and mauve. His faces are very pale, almost bloodless; they belong to creatures with reddish hair and strange-coloured eyes (like icy water or crystalline rock), wandering in another world, a world beyond the mirror.’