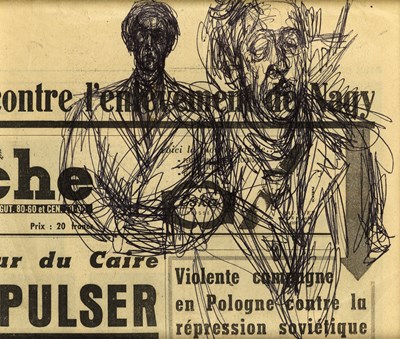 
The present sheet depicts one of Giacometti’s most significant portrait subjects. A Japanese professor of philosophy, Isaku Yanaihara (1918-1989) arrived in Paris in 1954 on a scholarship to study at the Sorbonne, and soon befriended a number of writers and artists. He first met Giacometti at the Café des Deux Magots in Paris in November 1955, and visited the artist’s studios a number of times. The two men developed a close friendship, and in the fall of 1956 Giacometti asked Yanaihara to pose for him. Their first session took place on October 6th, 1956, with Giacometti first working on a handful of drawings of his new model, although within a day or two he had begun a painting on canvas. As James Lord has noted of Yanaihara, ‘With a large head, strong jaw, broad, high forehead, and small but piercing eyes in well-defined sockets, he was handsome but not imposing. As a model he came close to being ideal, because in addition to the striking singularity of his features and the lively concentration of his gaze, he was capable of remaining for long periods absolutely motionless. The essential aspect of his suitability was friendship, as Giacometti needed the emotional participation of his model in an act which called for extraordinary unselfishness but offered a rare measure of intimacy.’ Over the next few years, the professor was to sit for several paintings, a number of drawings and two sculpted busts. Yanaihara kept several journals recording their conversations, which became the basis of a Japanese monograph on Giacometti, published in Tokyo in 1958. He also became friendly with the artist’s wife Annette, and the two became lovers, with Giacometti’s knowledge and consent.Yanaihara visited Paris every year but one between 1955 and 1961, and posed for Giacometti countless times; indeed over this period he sat for the artist for a total of some 230 days in all. The two men would meet every day for lunch, after which Yanaihara would patiently pose for several hours in the afternoon and evening. (In a letter written to Pierre Matisse in October 1956, shortly after Yanaihara had begun posing for him, the artist praised his ‘Japanese friend who poses unmoving, like a statue.’) As Lord has written, ‘The intimacy between the two men grew intense, began to have the aspect of a passionate attachment...[Giacometti] continued laboriously to paint portraits of the philosopher, each one a challenge to renew the infinitely changeable inferences of vision. This determination to prove that seeing can be believing became concentrated entirely on likenesses of Yanaihara...Yanaihara’s portraits had become essential to a sense of enriching self-discovery in his work.’This rapid pen sketch, drawn on the corner of a newspaper, dates from the period near the end of 1956 when Giacometti was struggling with his first portraits of Yanaihara; a series of three paintings which he reworked obsessively over a period of several weeks. As one scholar has written of this time, ‘At the end of the year, while painting a portrait of Isaku Yanaihara, Giacometti found himself unable to capture the professor’s likeness. The artist sank into frantic despair, neglecting sculpture to repaint Yanaihara’s image so many times that resemblance and style became mired in a miasma of grey paint. In a panic, Giacometti focused only on his model’s head and eyes, until those areas on the canvas grew thick with layered lines that still faded into an undefined grey periphery. This crisis lasted well after Yanaihara’s departure: images of Diego and Annette from 1957 and 1958 suffer from a similar lack of definition. Painting became a struggle between form and formlessness, usually resulting in a small figure apparently isolated at a distance in an undefined world...Giacometti needed desperately to resolve this impasse, which he did partly by rationalising the new style and partly by continuing to work his way through the morass to a more solid definition of forms (one reason why he needed to bring Yanaihara back from Japan in the subsequent summers).’