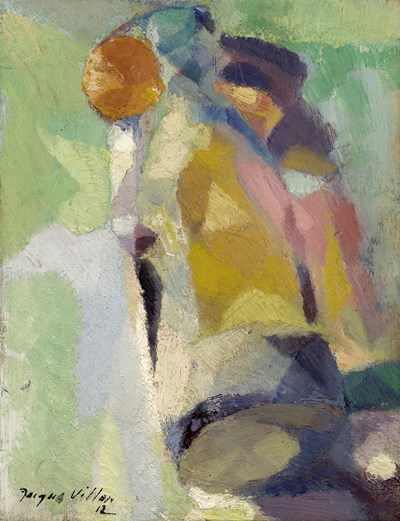 
Painted in the same year as the inaugural exhibition of the Section d’Or in 1912, this small painting dates to the very beginning of Villon’s interest in Cubist methods. Unlike his paintings and prints of 1911 or even the early part of 1912, in which the subject is readily evident, this painting is one of the first works by Villon in which the object depicted - a milk bottle, painted with faceted planes of colour - is not immediately apparent. A related painting of the same year, of nearly identical dimensions and closely related to the present work in style, technique and tonality, depicts a cow in profile, as seen on the label of a bottle of milk. Above the cow is a semicircular sign, which could be that of a shop, and the letters ITE, which must be part of the sign LAITERIE. As Douglas Cooper and Gary Tinterow have written, ‘Towards the end of his life, Villon referred to himself as ‘the Impressionist Cubist’ and this description is apposite because...a play of light and luminous tonalities were characteristic features of his work...He made a limited use of the technique of facetting and progressively evolved, under the combined influences of Gleizes and Delaunay, a style based on fragmented forms and a succession of overlapping planes of colour used to evoke volume and a sense of space.’