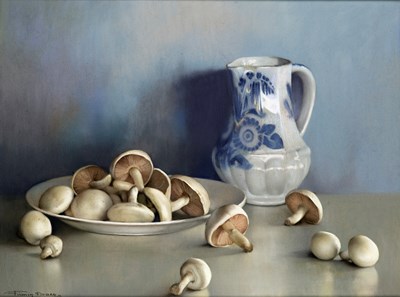 Still Life with Mushrooms and a Pitcher (Les Champignons) Sold


From around 1900 onwards Firmin Baes worked almost exclusively in pastel, employing a confidence and a virtuoso technique reminiscent of such 18th century masters of the medium as Jean-Baptiste Chardin. Baes’s exhibition pastels were usually drawn on canvas, rather than paper or board, and he seems to have developed a particular (and secret) technique of fixing the friable pastel medium to the canvas support. The resulting works, usually executed on a fairly large scale, are characterized by a refined technique and luminous colour. Almost certainly intended as an exhibition piece, this splendid large still life may be dated to the decade of the 1930’s, and is a fine and typical example of Baes’s meticulous pastel technique. A comparable pastel still life with a plate of mushrooms, dating from 1936 and of similar dimensions, is illustrated in a recent monograph on the artist, while another, much smaller example was recently sold at auction in Belgium. It is of works such as this that the author of a review of an exhibition of the artist’s work in 1934 noted, ‘Behold a still life by Firmin Baes, extraordinarily true in its tonalities, in the very matter of its objects. The eye is truly touched by the glistening round form of the translucent porcelain, the coarseness of the orange, the softness of the velvet cloth.’Writing at the time of an exhibition of Baes’s work in a Brussels gallery in 1932, another critic praised the artist’s pastel technique, and noted in particular a similar still life of mushrooms: ‘The Studio Gallery presents a series of new works by this pastellist who, by subtly squeezing with his thumb chalk in selected tones on the paper or the canvas, achieves a delicacy, softness or an intensity which is not often attained with such great effect with oil painting, and only rarely with the same successful use of the medium...I am referring...above all of the Mushrooms where the virtues of the pastel medium are excelled in reproducing the blue background and the jug made of black stoneware...’

Still Life with Mushrooms and a Pitcher (Les Champignons)