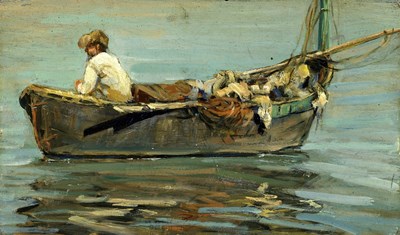 A Fisherman in his Boat Sold


Scenes of fishermen and fishing boats appear throughout Campriani’s painted oeuvre. Similar boats are found, for example, in a large canvas, signed and dated 1900, which appeared on the art market in London in 1984.

Provenance:
The artist’s studio, NaplesThence by descent in the family of the artist, until 2011.

A Fisherman in his Boat