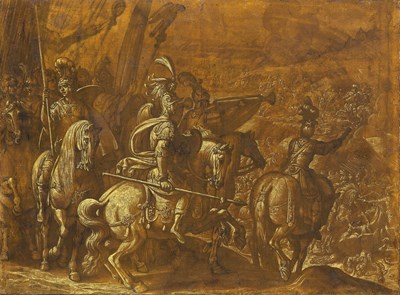 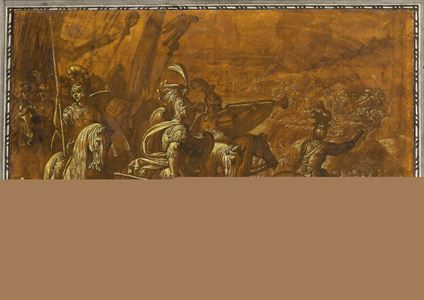 
This drawing is unusual among Antonio Tempesta's drawings in its impressive scale and degree of finish. While its composition is similar to such etchings by Tempesta as Alexander the Great Directing a Battle or The Roman Commander Cerialis Attacks near Trier, as well as some of the scenes illustrating Tasso’s Gerusalemme Liberata, this very large sheet - drawn with extensive heightening in gold and with the addition of a fictive mount border - must have been intended as a finished, independent work of art. In this context, it is interesting to note what may possibly be a reference to this drawing, or one like it, in the manuscript inventory of paintings belonging to the noted 17th century Roman collector Cardinal Scipione Borghese (1577-1633). The inventory, which may be dated to between 1615 and 1630, lists two large framed drawings by Tempesta: ‘Doi disegni chiari oscuri in carta gialla con cornice negra alti 1 2/3 larghi 5 1/4. Tempesta’5 (‘Two drawings in chiaroscuro on dark yellow paper with black frames, height 1 2/3, width 5 1/4, by Tempesta’). As Eckhard Leuschner has noted, with reference to the present sheet, ‘Among the surviving documentary evidence of Scipione Borghese's Tempesta acquisitions, the Doi disegni oscuri chiari con cornice in carta gialla negra are especially interesting. They must have been pictorial drawings by the artist executed on paper, representing, in their monochromatic composition, the antique bas-reliefs he valued. One – albeit damaged – example of Tempesta’s elaborate technique was on the art market some years ago: on brown paper (probably the above-mentioned carta gialla), one can see a line of mounted soldiers in ‘antique’ armour in the foreground, moving from a small hill towards a battle in the middle and far distance. In its composition the drawing is reminiscent of the etchings of the Alexander series, but this is not a rapid sketch but a highly elaborate drawing by Tempesta. The drawing is not only executed with brown washes and white heightening, but also has various accents in gold, which gives it the impression of something precious, which must have appealed to a collector like Scipione Borghese, who was obsessed with art treasures and kunstkammer objects.’ While this impressive Battle Scene may not be definitively identifiable as one of the two large framed drawings by Antonio Tempesta in the Borghese collection, the mention of such sizeable and highly finished drawings in one of the most prominent Roman collections would suggest that the artist must have occasionally produced such elaborate works as this for sale to prominent collectors and connoisseurs.