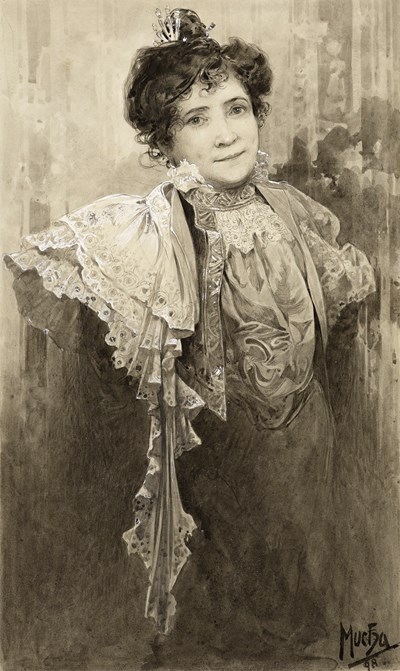 
Drawn in 1898, at the height of Mucha’s success as an Art Nouveau designer, this drawing is a portrait of the writer and novelist Marie-Louise Gagneur (1832-1902). One of the leading feminist authors of the day, Gagneur earned a considerable amount of popularity for her novels, usually of a socialist and often anticlerical bent, which were published in serial form in newspapers before being issued as books. Among her best-known novels are Les réprouvées (1867), Les crimes de l’amour (1874) and Le crime de l’abbé Maufrac (1882). Gagneur’s published works often highlighted the inferior position of women in contemporary society, and also campaigned for the reform of the divorce laws. Gagneur’s daughter Marguerite, known as Syamour, was a talented sculptor and a friend of Mucha who posed for several of his works. (The artist is also known to have photographed the younger Gagneur, and in some of his written reminiscences refers to her and her mother as the ‘Siamours’.) Between 1898 and 1902 mother and daughter lived in an apartment across the street from Mucha’s studio on the rue du Val-de-Grâce in Paris, where the artist had moved in the summer of 1896. A related pastel drawing of the same sitter by Mucha, also dated 1898, is illustrated in a book published in 1971, where it is tentatively but incorrectly identified as a portrait of Sarah Bernhardt. This drawing was at one time part of the collection of drawings, mainly by Eastern European artists, assembled by the Czech author and playwright Emil Synek (1903-1993), and has remained in the possession of his descendants until recently.