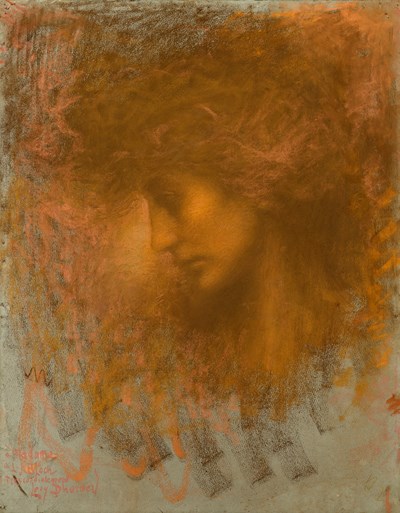 The Head of a Young Woman Sold


Lévy-Dhurmer’s Symbolist depictions of women, characterized by an intense melancholy and vibrant colours, were popular with the public. His penchant for paintings and pastels of solitary female figures reflects the further influence of, on the one hand, the sfumato technique of Leonardo da Vinci’s paintings, and on the other, the sensibilities of the English Pre-Raphaelites.As early as 1906, one scholar wrote in praise of Lévy-Dhurmer’s ‘astonishing power of draughtsmanship, taste of a rare order...a genuine love of all that is exquisite and subtle, without any trace of affectation, a fine sense of order and harmony of line and colour – these are the qualities by which the work of this versatile genius is distinguished.’ Lévy-Dhurmer’s pastel technique was admired by such fellow artists as Henri Fantin-Latour and Fernand Khnopff, and this appreciation has continued to the present day. As one modern scholar has noted, ‘Here indeed, is unquestionably the Symbolist painter who shows the most brilliant mastery of pastel…his pastels strike us with the perfection of their execution and the originality of his inspiration.’ Another writer adds that the artist was ‘a virtuoso with pastels, able to draw the best from the velvety textures and singular tones of that medium. Lévy-Dhurmer centered many of his often mysterious compositions around a human face.’

Provenance:
Given by the artist to Mme. L. J. Bloch (possibly the French sculptor Élisa [Mme. Léon] Bloch)Acquired by a private collector in the early 20th centuryBy family descent to a private collection, France, until 2010