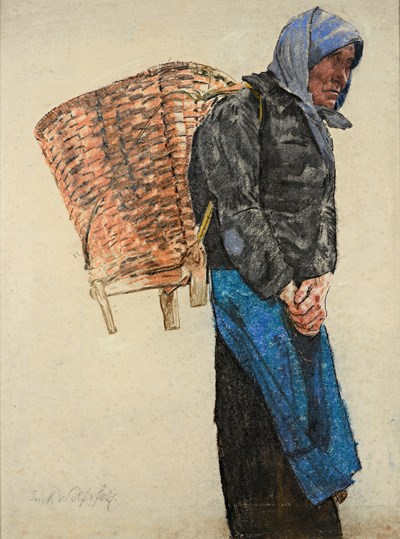 An Old Woman with a Basket Sold


Writing a few years after his death, one critic noted that ‘To say that Erich Wolfsfeld was just a brilliant technician would be unjust to his memory. He was much more than a technician. He was an artist who loved drawing for its own sake - who could combine power and sensitivity – who enjoyed describing the human form either with brush or chalk or the etcher’s needle. And he solved the problem of the portrayal of the human race with an intensity of perception that is deeply moving particularly in his studies of old men and young children.’ More recently, another critic wrote of Wolfsfeld, ‘The simple reality of what he saw on his travels did not move him either to exaggerate or caricature his subject matter. The elderly, poor and blind whom Wolfsfeld observed and painted did not, in any case, merit such treatment. His compassionate vision records the dignity of peoples thoroughly accustomed to adversity. Wolfsfeld’s is an outlook with which Rembrandt himself might have sympathised... ‘In [oil paint] and other media, such as chalk or pen and wash, Wolfsfeld demonstrated a wonderful certainty yet fluency in his drawing...He was an artist of rare ability.’

An Old Woman with a Basket