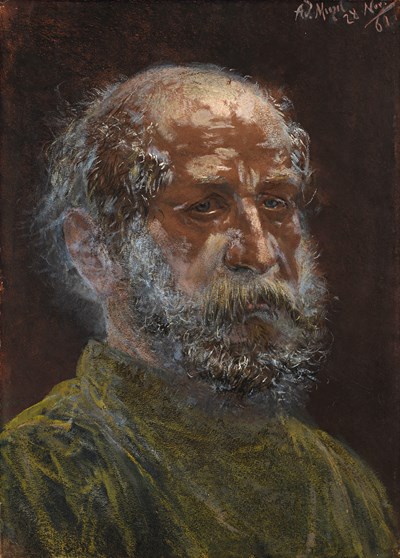 
Drawn on the 28th of November 1861, this fine character study of is one of a handful of Jewish subjects for which the artist found models in the Mühlendamm area of Berlin. Indeed, the present sheet may depict one of the city folk who would often wait outside Menzel’s studio for the chance to sit for the artist, in return for a small payment. The unknown sitter of this portrait is sympathetically depicted by the artist, and is, despite a degree of informality, imbued with more than a little dignity. This large sheet is drawn in an opaque gouache; Menzel’s preferred medium from the beginning of the 1860s onwards. As has been noted of the artist’s work of this period, ‘During the 1860s Menzel developed a technique using a combination of watercolour and gouache which was increasingly important for his work. He would apply the paint in several layers, occasionally scraping out or rubbing in the colours…his work in this medium…can look deceptively like oil painting but on a very small scale.’ The identification of the subject of this drawing as a Jewish man dates back to the period of its ownership by the artist’s sister Emilie, when it was described as such in Hugo von Tschudi’s 1905 catalogue of her collection. Character studies of bearded Jews occur infrequently in Menzel’s corpus of drawing and paintings, mainly in the 1850s, when he produced a series of portraits of elderly Jewish men. As the Menzel scholar Marie Ursula Riemann-Reyher has described these works, ‘Their faces are earnest, characterized by dignity and the contemplation of old age.’ A painting of an analogous subject, datable to 1856, is in the Städtische Kunsthalle in Mannheim, while an oil sketch of a similar Jewish type is in the collection of the Museum Georg Schäfer in Schweinfurt. The subject of the present sheet is, however, arguably less overtly ‘Jewish’ in appearance than these earlier works, and there is little to identify him as such.

This powerful gouache study was among the works retained by the artist’s sister, Emilie Krigar-Menzel, when she sold the bulk of the contents of her brother’s studio to the Nationalgalerie in Berlin in 1906. It later belonged to the German-Jewish industrialist and art collector, Adolf Bensinger (1866-1939) of Mannheim, whose collection was mainly formed in the 1910s and 1920s. Apart from the present sheet and a pencil drawing by Menzel, Bensinger owned works by Rosa Bonheur, Alexandre Calame, Jean-Baptiste-Camille Corot, Honoré Daumier, Ferdinand Hodler, Wilhelm von Kaulbach, Max Liebermann, Pierre-Auguste Renoir, Giovanni Segantini, Hans Thoma and Vincent Van Gogh. The collection was sold at auction in 1940, the year after Bensinger’s death, and the present sheet was one of six lots bought back at the sale, for a total of 45,600 Reichsmarks, on behalf of two of the collector’s intended heirs, his young grandnieces Irmgard and Gabriele Conzen. In 1942, however, the assets of the Conzen family were given to the Nazi High Command in exchange for exit visas to Switzerland, where the family settled that year, and it was not until 1962 that title to the property was eventually returned to the Conzen heirs.