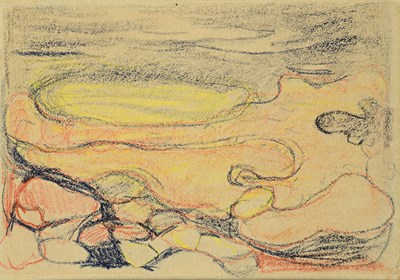 Rocks at the Edge of the Sea Sold


Although he worked more frequently in watercolours, Edvard Munch produced a significant number of pastel drawings throughout his long career, including two of the four versions of The Scream. A testament to his lifelong use of the pastel medium is found in what is thought to be his last self-portrait; a very large drawing in coloured chalks on canvas, in the collection of the Munch Museum in Oslo. Drawn in 1943 at the age of nearly eighty, Munch depicted himself before a drawing board and holding a stick of pastel in his hand.This bold pastel study of rocks or boulders at the water’s edge is likely to have been drawn at the little village of Åsgårdstrand, on the western shores of the Oslofjord, where the beach was strewn with large rocks. The Munch family had a summer house at Åsgårdstrand, which is about a hundred kilometres south of Oslo, and spent vacations there from 1889 onwards. Munch returned to the small fishing village, which also attracted a number of other artists and writers from the capital, almost every summer for twenty years. It was a place to which the artist remained strongly attached, and the curving shoreline and the landscape around Åsgårdstrand were to serve as a constant source of inspiration for his paintings throughout the 1890’s. Ellen Lerberg has noted of Munch that ‘The characteristic shoreline [of Åsgårdstrand] runs like a common thread through many of his pictures, including The Dance of Life and Melancholy.’ Indeed, as Munch himself wrote, after buying a small house in Åsgårdstrand in 1897, ‘To walk around here is like walking among my pictures. I feel such an urge to paint when walking around in Åsgårdstrand.’ After several summers at Åsgårdstrand, Munch came to know the features of its shoreline so well that he could reproduce them, if necessary, in his paintings even when he was away from Norway.Similar rocks appear in the foreground of Munch’s large painting of Summer Night (Inger on the Beach) of 1889 in the Kunstmuseum in Bergen, in which the artist’s sister is posed sitting on boulders at the water’s edge. This and several other paintings of the same date were painted during the summer of 1889 at Åsgårdstrand. Among a handful of drawings by Edvard Munch of a similar subject is a chalk drawing of Stones at Åsgårdstrand, datable to after 1912, also in the collection of the Munch Museum in Oslo. In a text that may be linked to his Åsgårdstrand paintings, as well as perhaps to the present pastel, Munch wrote, ‘I was walking along the shore – the moon was shining through dark clouds. The stones loomed out of the water, like mysterious inhabitants of the sea. There were large, broad heads that grinned and laughed. Some of them up on the beach, others down in the water. The dark, bluish-violet sea rose and fell – sighs in among the stones...’The first owner of this drawing was the artist’s younger sister, Inger Munch (1868-1952). The terms of Munch’s will specified that, after his death, Inger Munch was permitted to select a certain number of works for herself from the contents of the artist’s studio, before the remainder of the estate was presented to the city of Oslo. Together with several other works on paper by Munch, this drawing was later given as a gift by Inger Munch to a close friend, Berta Folkedal (b.1889).

Provenance:
The artist’s sister, Inger Marie Munch, OsloGiven by her to Berta Folkedal, OsloGalleri Kaare Berntsen, OsloAcquired from them by a private collector in 2003Anonymous sale, London, Sotheby’s, 20 June 2006, lot 115.

Rocks at the Edge of the Sea