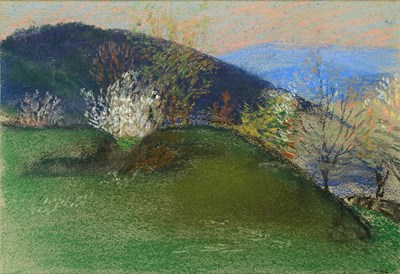 Landscape with Trees in Blossom Sold


William Rothenstein often worked in the medium of pastel, mainly for portraits but also occasionally for landscapes. Dated 1902, this fine and lively pastel landscape would appear to have been executed during the artist’s visit to Germany that year. In January 1902, an exhibition of Rothenstein’s work was mounted at the Eduard Schulte Gallery in Berlin. Although the exhibition was well received by critics, it did not result in many sales, apart from some drawings and prints. It was in Berlin in March 1902 that Rothenstein met the German playwright Gerhart Hauptmann, who invited the artist to stay with him in Silesia, in the mountain range known as the Riesengebirge (today the Krkonoše mountains) straddling what is now the border between Poland and the Czech Republic. As Rothenstein later recalled of Hauptmann in his memoirs, ‘An immediate sympathy sprang up between us…He pressed us to come to the Riesengebirge, in Silesia, where he lived; I would find the landscape inspiring, he promised…We took train to Hirschberg, and from there drove up to Agnetendorf. It was early spring, and the orchards were in full flower, the grass bright emerald; behind were the Riesengebirge, ringed by dark pine woods. The sun was shining; it was our first sight of the snow-covered mountains, and the higher we got the higher our spirits rose too…Agnetendorf, with its beautiful little farmhouses, low, thatched, with small gay-coloured shuttered windows, each with its orchard, was ideal for a painter. What a happy change it was from Berlin!’The artist’s son John Rothenstein has noted that, in the early years of the 20th century, his father’s work developed ‘a sudden preoccupation with daylight, with a consequent intensification of his palette. Its chief cause was probably his increasing interest in landscape. He worked, almost always, in front of his subject rather than from studies, which at once brought him up against the problems of the representation of open-air light. Another cause was the delayed influence of Impressionism, from which he had been temporarily immunized by Whistler’s advocacy of low tones. Rejection of Whistlers dandyism, I surmise, led naturally to the end of this immunity, and his eye was gradually filled by dazzling light.’ Remaining in Germany, the present sheet was one of two landscape pastels by William Rothenstein, each of similar dimensions, acquired by the Berlin banker and art collector Julius Stern (1858-1914). Dispersed at auction in 1916, Stern’s collection included paintings, drawings and prints by such artists as Maurice Denis, Paul Gauguin, Vincent van Gogh, Max Liebermann, Claude Monet, Edvard Munch and Emil Nolde, among others.Among other pastels of this period in Germany is a view of a street in Hildesheim, signed and dated 1902, in the collection of the Manchester City Art Galleries.

Landscape with Trees in Blossom