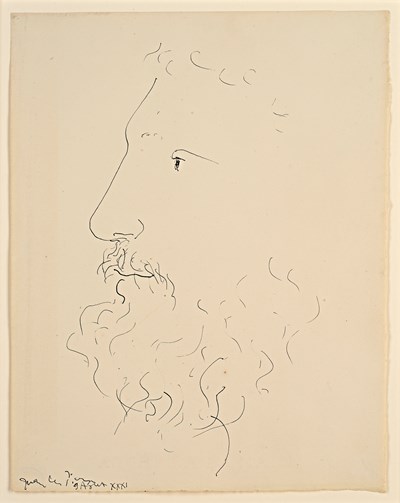 The Head of a Bearded Man in Profile Sold


Drawn in the summer of 1931 at Juan-les-Pins, while Picasso was renting the Villa Chêne-Roc for the month of August, the present sheet was unknown to Christian Zervos when he published his monumental catalogue raisonné of Picasso’s work, and has remained little known to most Picasso scholars. It may be related to a series of pen drawings and paintings of a sculptor (or sculptors) with a model in a studio, which Picasso produced throughout that month. The sculptors depicted in these drawings are invariably bearded men, and very similar in type to that seen here. This drawing may also be associated with two stylistically similar pen and ink drawings of bearded men, drawn on the 9th and 10th of August 1931, which are both in the collection of the Musée Picasso in Paris. The theme of the sculptor and his model was central to the etchings produced by Picasso between 1927 and 1929 for Honoré de Balzac’s short story Le Chef-d’oeuvre inconnu (The Unknown Masterpiece), commissioned by Ambroise Vollard and published in 1931, while the sculptor is found as a subject in nearly half of the etchings of the Vollard Suite, on which the artist worked between 1930 and 1937. It was perhaps natural for Picasso to treat the theme of the sculptor so extensively in his drawings and prints at this time, since he himself had returned with such enthusiasm to the practice of sculpture at the Château de Boisgeloup, a country house near Gisors, in 1930 and 1931.The drawing may also be related thematically to a series of engravings commissioned from Picasso by the publisher Albert Skira to illustrate an edition of Ovid’s Metamorphoses, on which the artist worked in the autumn of 1930. Published in 1931, the Ovid engravings included a number of similar depictions of bearded men in the guise of gods or Greek heroes. Echoes of this bearded figure continue to be found in Picasso’s drawings over the next few years; a similar head in profile, for example, is found in a drawing of c.1932 in the collection of the Museum Ludwig in Cologne.This spare, economical manner of Neoclassical line drawing was to dominate Picasso’s graphic work in the early 1930’s. Drawings of this had their roots in the classical forms such as Greek vases and portraits on ancient coins, as well as the line drawings of the great 19th century draughtsman Jean-Auguste-Dominique Ingres, whose work was to be a lifelong touchstone for the Spaniard. A closely related pen drawing of a bearded man in profile to the left, dated the same day as the present sheet and of similar dimensions, appeared at auction in Paris in 1992. Photo-certificates from Maya Widmaier Picasso, dated 16 May 1998, and Claude Ruiz-Picasso, dated 13 February 2014, accompany the present sheet.

The Head of a Bearded Man in Profile