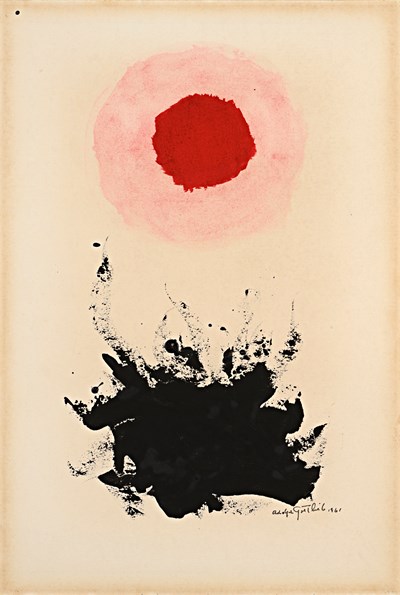 
This is a superb example of Gottlieb’s draughtsmanship at the height of his career. Though the artist’s drawings remain somewhat less studied than his paintings, it has been noted that such works were intended as autonomous works of art, rather than as preparatory studies for paintings. Indeed, in many cases, Gottlieb’s works on paper can be seen to develop and refine the compositional ideas that he was simultaneously exploring in his much larger paintings. As the Gottlieb scholar Mary Davis MacNaughton has written of the artist, ‘His works on paper are not as well known as his paintings, having been exhibited less often, but they embody his artistic vision just as powerfully. As small works, they functioned like sketches, allowing him to express his visual ideas in the freshest way. But these works were not traditional sketches; in other words, they were not studies for paintings, but rather independent works that paralleled his paintings. Their energy is equally dynamic, but their scale is more intimate.’The composition of this vibrant drawing, drawn in 1961, is derived from the series of early Burst and Blast paintings of 1957 and 1958, in which Gottlieb developed a new and simplified imagery that would soon develop into the signature style of the final part of his career. As these seminal works have been described, ‘two forms, roughly equal in area, one above the other; they do not touch, but it feels as if they were bound together, as by planetary forces. The lower form is black and painted in a choppy gestural way; the upper form, red, is smoother in surface and edge, but not closed or measured. It is the product of another type of gesture: the ellipse is freely brushed and surrounded by a tonally graduated halo.’ The juxtaposition of the two zones of the Burst compositions, contrasting the stillness of the oval shape and the dynamism of the expressive marks below it, is a feature of the present sheet. Although the titles of some of the Burst paintings seem to suggest bombs or explosions, and indeed several critics saw in these works – painted at the height of the Cold War - a reference to the atomic bomb, the artist was less forthcoming about what they were meant to represent. As Gottlieb was quoted in a newspaper interview at the time of the 1963 São Paulo Bienal, where his work won the Grand Prize, ‘I try, through colors, forms and lines, to express intimate emotions...My paintings can represent an atomic bomb, a sun, or something else altogether: depending on the thinking of whoever is looking at it.’