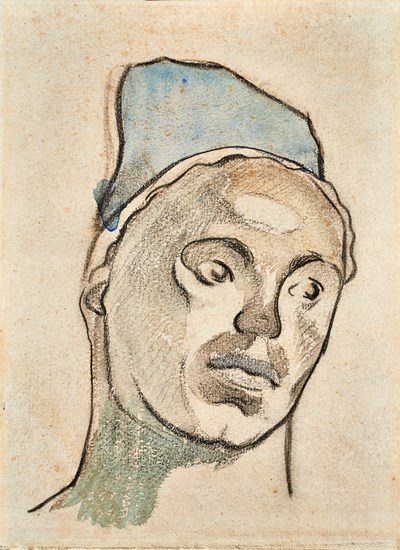 The Head of a Breton Woman


Throughout the latter half of the 1880s, Paul Gauguin made several trips to Brittany, working mainly in the area around Pont-Aven and Le Pouldu. As he wrote to his friend Schuffenecker in 1888, ‘I like Brittany. I find a certain wildness and primitiveness here. When my clogs resound on this granite soil, I hear the dull, matt, powerful tone I seek in my painting.’ He held a particular fascination for the Breton people, painting and drawing them frequently. In October 1889 he wrote to Vincent van Gogh from Le Pouldu that, ‘I try to put into these desolate figures the savageness I see in them and that is also in me. Here in Brittany, the peasants have a medieval air about them and do not for a moment look as though they think that Paris exists and that it is 1889. Everything here is harsh, like the Breton language, and impenetrable – for all time it would seem.’This fine drawing may be dated to Gauguin’s fifth and final visit to Brittany in 1894, following his first stay in Tahiti, and, as Ronald Pickvance has noted, ‘shows how the influence of his Tahitian stay affected Gauguin’s vision of Brittany in 1894.’ While this head does not definitively appear in any surviving work by Gauguin, Pickvance has suggested a tentative relationship with the right-hand figure in the painting Two Breton Peasant Girls, signed and dated 1894, in the Musée d’Orsay in Paris. Works from Gauguin’s final stay in Brittany in 1894 are relatively rare, as the artist produced very little work during the six and a half months that he was in Le Pouldu and Pont-Aven. A fight with some local sailors in the port of Concarneau left him with a fractured leg. In severe pain and taking morphine daily, he was confined to his bed for two months, during which he was unable to paint. Able only to work on a small scale in his room, during this period he produced mainly woodcuts and transfer drawings in watercolour, gouache and pastel, mostly of Tahitian subjects.The woman in this drawing is wearing a Breton headdress typical of the women of Pont-Aven, also seen in a comparable pastel drawing of the heads of two Breton women of the same date, dedicated by Gauguin to Maxime Maufra, in the collection of the Musée de Pont-Aven. As Gauguin wrote to Van Gogh of the Breton costume: ‘The dress is also almost symbolic, influenced by the superstitions of Catholicism. Look at the bodices, shaped like a cross at the back, and the black kerchiefs with which the women cover their heads, like so many nuns. It makes their faces look almost Asian, yellow, triangular and severe...’ The headdress worn by the woman in this drawing would appear to be a flat Breton working cap, of the sort worn under a more elaborate white coiffe. A very similar Breton cap is seen in an etching of a Nude Woman with her Hands Behind her Head by the Pont-Aven artist Armand Seguin, executed in 1892 and published three years later.The model for this watercolour may be tentatively proposed as one of two Breton women who appear in earlier works by Gauguin. The facial features - in particular the high, prominent forehead and full lips - of the woman in this drawing are quite similar to those of a woman from Pont-Aven who is known to have posed several times for Gauguin, as well as for other artists, including Paul Serusier and Charles Laval. She appears in a small canvas Portrait of a Pont-Avennoise (perhaps Marie Louarn) by Gauguin of c.1888, and is possibly to be identified with one Marie Louarn (or Louarin), who was apparently the only woman in Pont-Aven willing to pose nude for Gauguin, although she always insisted on keeping her coiffe on her head. She is also likely to have been the model for two gouache drawings by Gauguin of a semi-nude Breton woman, one in the Van Gogh Museum in Amsterdam and the other in the collection of Jean Bonna in Geneva, which are in turn related to the painting In the Hay (The Pigs) of November 1888. Louarn is, however, said to have given up modelling and to have become a prostitute by 1892, two years before the presumed date of this watercolour. Another possibility is a Breton woman who posed for a small painting by Gauguin also painted six years earlier, in 1888; Portrait, Presumed to be Marie Lagadu. Marie Lagadu (Marie ‘Black Eyes’) is thought to have been a serving girl at the pension Gloanec in Pont-Aven, where Gauguin stayed in 1894.The present sheet was part of the substantial collection of paintings, drawings and prints by Gauguin belonging to expatriate Spanish sculptor and ceramicist Francesco (Paco) Durrio (1868-1940), who lived in Paris. Durrio met Gauguin in 1886 and became a devoted friend, particularly during the latter’s stay in Paris from 1893 to 1895, after his first trip to Tahiti. The two shared a workshop in Paris, and had many of the same interests; Gauguin even invited Durrio to accompany him back to Tahiti, although he declined the opportunity. Before Gauguin departed on his second journey to the South Seas in 1895, he entrusted Durrio with a large and important group of his paintings and drawings, to which he added several works sent from the tropics. After Gauguin’s death, Durrio became one of his foremost champions and disciples, lending works by the master from his collection to various exhibitions in Spain and France - notably the retrospective exhibition of Gauguin’s oeuvre at the Salon d’Automne of 1906 - and introducing his work to fellow Spaniards in Paris, notably the young Pablo Picasso. Although Durrio tried to keep his collection of works by Gauguin intact, as the painter had wished, financial need forced him to sell much of the group in the 1930s.

The Head of a Breton Woman