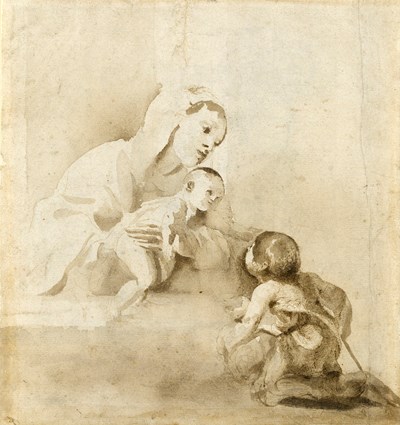 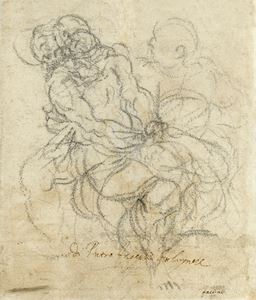 The Virgin and Child with the Young Saint John the Baptist [recto]; Study for a Deposition [verso] Sold


Although unrelated to any surviving painting, the present sheet is a splendid example of Faccini’s confident draughtsmanship. The use of broad areas of fluid wash to create effects of light in contrast to the areas of untouched white paper, as well as the relatively insubstantial forms of the figures themselves, is a characteristic feature of Faccini’s pen draughtsmanship of the late 1590’s. The areas of very fine pen hatching and crosshatching to add depth to the shadows, particularly evident in the drapery of the young Saint John the Baptist, have led to the tentative suggestion that the drawing may have been intended to have been reproduced as a print. Stylistically comparable drawings include two studies for Faccini’s altarpiece of The Assumption of the Virgin in the Bolognese church of Santa Maria dei Servi; one in the Musée Calvet in Avignon and the other in the Louvre. Also comparable in technique and handling are two drawings of The Entombment of Christ and The Holy Family with Saints Francis and Dominic in the British Museum, as well as a pair of studies of The Holy Family Adored by Saint Francis in the Louvre and a study of The Holy Family with Saints Catherine of Siena and Dominic, also in the Louvre. A drawing of the Virgin and Child in Frankfurt, formerly given to Bartolomeo Schedoni but attributed to Faccini by Christel Thiem, is also comparable to the present sheet.The rapidly drawn study in black chalk on the verso of this sheet may have been intended for a small devotional painting. Indeed, the drawing is close in composition to a late painting on copper by Faccini of Christ Supported by Angels, painted around 1600 and now in a private collection. Other drawings of a similar subject by Faccini, though different in composition, are in the Albertina in Vienna10 and the British Museum. The late Mario di Giampaolo, who confirmed the attribution of this drawing to Faccini, further noted that the draughtsmanship of the black chalk study on the verso of the sheet bears similarities with that of Tintoretto. Like many of his contemporaries in Bologna, Faccini was influenced by the paintings and drawings of the Venetian masters, and in particular Tintoretto. A similarly free and spirited handling of chalk is found in part of the underdrawing of a study by Faccini of Two Saints with Putti in the Ashmolean Museum in Oxford.

The Virgin and Child with the Young Saint John the Baptist [recto]; Study for a Deposition [verso]