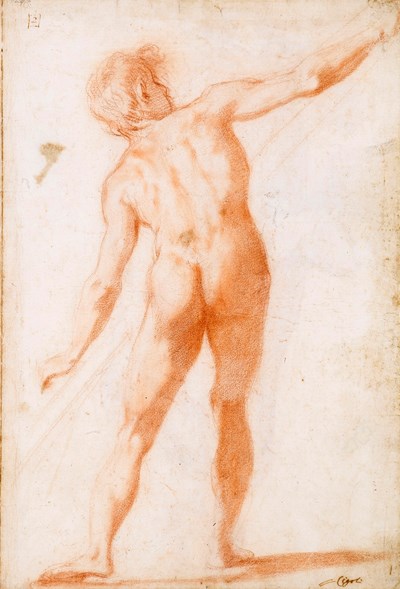 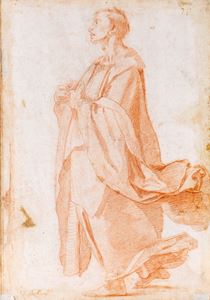 Recto: Study of a Male Nude, Seen from Behind [recto]; Study of a Draped Figure, Striding to the Left [verso] Sold


Filippo Baldinucci credits Cigoli with reestablishing the principles of life drawing among the painters of Florence, and his studies from life, invariably executed in red chalk, are an integral part of his graphic output. As a young artist, Cigoli, along with Gregorio Pagani and Domenico Passignano, established a private and informal drawing academy in a rented studio in Florence, in which the artists drew from posed models.Neither of the figure studies on the recto and verso of this splendid drawing can be definitively related to a surviving painting by Cigoli. Miles Chappell has, however, tentatively suggested that the male nude may be a first idea for the pose of the angel in Cigoli’s altarpiece of The Resurrection, painted in 1590 for the Palazzo Pitti. Long thought to be lost and only recently rediscovered, the painting was one of Cigoli’s first Medici commissions, and marked the beginning of his successful career. The figure of an angel for which Chappell posits this drawing may be a study is in the middle ground of the composition, partially obscured by a soldier. The male nude in this drawing appears to be lifting or holding a rectangular object, only faintly drawn in red chalk, which may perhaps be identified as the tomb slab that the angel lifts in the painting. Chappell has further suggested that the draped figure on the verso of the present sheet may be related to one of the figures in the background of the same painting, an area that is no longer legible due to the poor condition of this part of the canvas.The male nude on the recto of present sheet may also be a first idea for a figure in another painting by Cigoli of the early 1590’s; the Siege of Jerusalem in the National Gallery of Ireland in Dublin, in which a group of soldiers raising a ladder is prominent at the right edge of the composition. In this context, it is in particularly interesting to note the very similar pose of a soldier in a painting of the same subject of The Siege of Jerusalem by Cigoli’s teacher, Santi di Tito. Painted in 1589 as part of the temporary decorations for the marriage of Ferdinando de’Medici and Christina of Lorraine, Santi di Tito’s painting is now known only through an engraving of it used to illustrate an account of the wedding festivities, published in 1589. The pen inscription ‘Cigoli’ at the lower right of the recto of the present sheet is identical to that found in drawings by the artist in the Uffizi and elsewhere, as well as in a group of chalk drawings by Cigoli, from an 18th century Florentine collection, which appeared at auction in London in 1985. Miles Chappell has suggested that this inscription – certainly by someone close to the artist - may be in the hand of Cigoli’s nephew and biographer, Giovanni Battista Cardi. Another of the drawings with this ‘Cigoli’ inscription, now in the British Museum, also bears the same inscription ‘Di Gio Navez(?)’ found on the verso of the present sheet. This has been recently identified by Miles Chappell as referring to the 17th century artist and collector Cavaliere Giovanni Navarrette (died c.1652), of whom little is known today, who seems to have owned a number of drawings by Cigoli.

Recto: Study of a Male Nude, Seen from Behind [recto]; Study of a Draped Figure, Striding to the Left [verso]