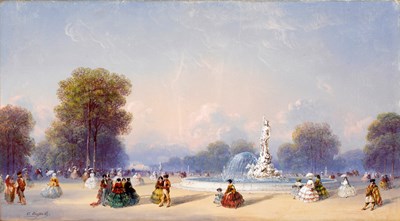 The Neptune Fountain and the Paseo del Prado, Madrid Sold


Carlo Bossoli made a long trip to Spain and Morocco in 1851, and this splendid watercolour is likely to date from this year or shortly thereafter. Another view of Madrid, depicting the Plaza Mayor and almost certainly of the same date, shares the same Russian provenance as the present sheet. Apart from Madrid, Bossoli is also known to have visited a number of other cities in Spain in 1851, and in later years produced spirited watercolour and gouache drawings of Seville and Cadiz, as well as views of the Escorial, Burgos, Aranjuez and Barcelona. Some of these views may have been commissioned by the Spanish-born Empress Eugénie, wife of Napoléon III, who is listed in Bossoli’s account book as the purchasor of eleven ‘vedute della Spagna’ in 1858.The present sheet is one of four highly finished drawings in gouache and watercolour by Bossoli that were once part of the collection of the Empress Alexandra Feodorovna of Russia (1798-1860), born Princess Charlotte of Prussia and the wife of Tsar Nicholas I. The other three watercolours were views of the Royal Palace in Berlin, the Plaza Mayor in Madrid and the colonnade of the summer palace at Sanssouci, near Berlin. The set of four watercolours by Bossoli were presented as gifts to a British diplomat shortly before or after the Dowager Empress’s death in 1860. They remained in the possession of the diplomat’s family for the next 130 years before being dispersed at auction in 1990.

The Neptune Fountain and the Paseo del Prado, Madrid