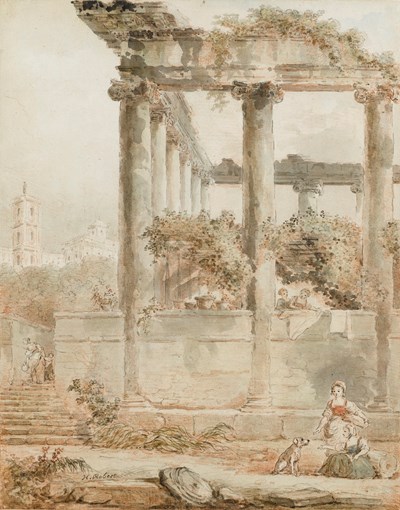 Landscape with the Temple of Saturn, Rome Sold


The collector and connoisseur Pierre-Jean Mariette noted of Hubert Robert’s drawings that they were often finer than his paintings, and were very popular and sought-after. With its transparent washes of colour, the present sheet is an excellent example of Robert’s consummate skill as a watercolourist, and is likely to have been executed as an autonomous work of art in its own right. Like Fragonard, Hubert Robert often made counterproofs of his drawings in both black and red chalk drawings. This was an essential task, since by making a counterproof any excess chalk dust – which otherwise might easily smear - would be removed from the original drawing. Often, the artist would then extensively rework the counterproof, adding pen, ink and wash and watercolour to create a second finished, albeit reversed, version of the original composition; such is the case with the present sheet. The original red chalk drawing for the present composition, executed in 1775, is today among the superb collection of Robert drawings in the Musée des Beaux-Arts in Valence. The Valence drawing is dated ‘du merc. 4 janvier 1775’, and was thus drawn a decade after the artist’s departure from Rome.Located at the northwest corner of the Forum, the Temple of Saturn (also known as the Temple of Concord) was a favourite subject of Robert’s, and was treated by him in several drawings and paintings. Among other drawings by Robert of the Temple of Saturn, all in red chalk, are a pair of studies – one dated 1762 - in the collection of the Musée des Arts Décoratifs in Lyon, as well as another drawing, also dated 1762, in Valence and a drawing of Washerwomen in the Ruins of the Temple of Saturn in the Louvre.A capriccio watercolour view of the interior of the Temple of Saturn, dated 1774, is in the Cleveland Museum of Art and, like the present sheet, was drawn over a counterproof of a chalk drawing.

Landscape with the Temple of Saturn, Rome