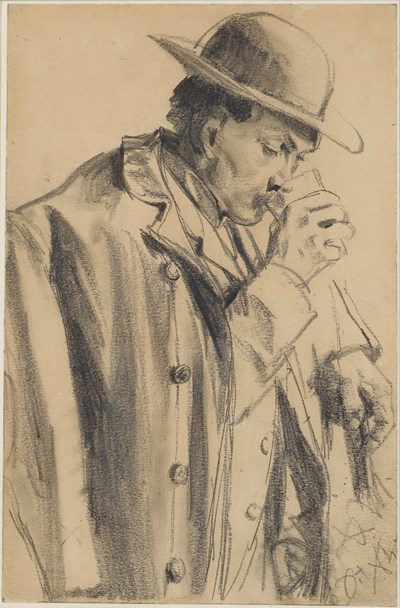 
In the 1870s, 1880s and 1890s Menzel made annual summer visits, together with his sister and her family, to the spa town of Bad Kissingen, near Würzburg in Franconia. While he rarely took the baths or waters himself, he found in Kissingen numerous subjects that captured his attention, and these resulted in a series of small gouache paintings of genre scenes dated between 1884 and 1893. This drawing is a study for one of the earliest of these small gouaches, Spa Guests at the Warm Kettle in Kissingen (Kurgästeam Wärmekessel in Kissingen), depicting people drinking heated mineral water served by a vendor. Painted in 1884, the small gouache was last recorded in a private collection in Berlin in 1905 and is now lost.

Another study for the same figure is found in a sketchbook used by Menzel between 1884 and 1892 and today in the Kupferstichkabinett in Berlin. A preparatory drawing for a different figure in the gouache Spa Guests at the Warm Kettle in Kissingen, depicting a woman drinking, was in a private collection in Hamburg in 1982, while a study of another woman in the same painting is today in the Museen für Kunst und Kulturgeschichte der Hansestadt Lübeck in Lübeck.

Six years later, in 1890, Menzel painted a larger gouache of a similar Kissingen subject, though horizontal in format and different in composition; this painting was with the Galerie Abels in Cologne in 1975. A somewhat analogous drawing of a man drinking, dated 1888 and formerly in the collection of Julius Held in Vermont, was used for this later painting.