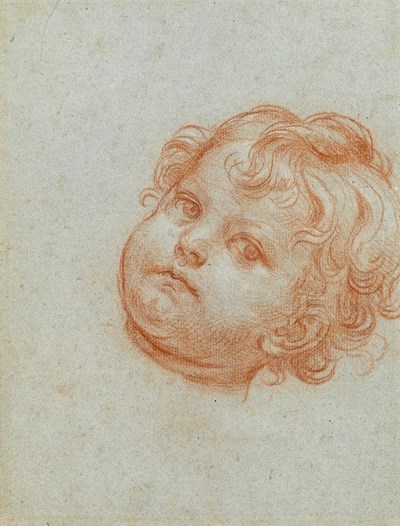 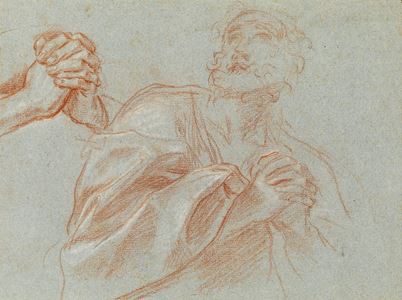 The Head of a Young Boy [recto]; The Penitent Saint Peter [verso]


Describing the present sheet as ‘a fine example of the artist’s later graphic manner’, Stella Rudolph has noted that the head of a putto on the recto of the drawing is a preparatory study for Maratta’s painting of The Death of Saint Joseph, dated 1676 and today in the Kunsthistorisches Museum in Vienna. The painting was commissioned from Maratta by the papal legate Cardinal Alberizzi for the private chapel of the Empress Eleonora Gonzaga of Mantua, wife of the Emperor Ferdianand III, in the Hofburg in Vienna. The recto of this drawing, which should be viewed horizontally, is a study for the small winged putto that appears just to the left of centre of the composition, over the bed of the dying saint and just below the foot of an angel. Other studies for the painting, include drawings for Christ, the Virgin and several of the angels, are among the large collection of drawings by Maratta in the Museum Kunst Palast in Düsseldorf. Also in the same collection is a similar study in black chalk of the head of a young boy, apparently the same model, which is a preparatory drawing for a painting of The Death of Saints Blaise and Sebastian of c.1680 in the Genoese church of Santa Maria di Carignano.The study of a penitent saint on the verso of the present sheet remains unconnected to any surviving work by Carlo Maratta, and would appear to be a study for an unknown painting. Although a somewhat similar praying figure appears, in reverse, in Maratta’s painting of The Death of the Virgin in the Villa Albani in Rome, painted around 1686, the verso of this drawing should instead be dated several years earlier, and to the same period – namely, the second half of the 1670’s – as the study on the recto. Rudolph has likened the drawing on the verso with some of Maratta’s initial studies in red chalk for the pendentive mosaics in the Cappella della Presentazione in St. Peter’s, begun in 1677.The present sheet was once part of an album of drawings by Carlo Maratta and other artists, in all likelihood assembled in the late 17th century or early 18th century. The album included twenty-seven chalk drawings by Maratta, most of which were preparatory studies for paintings, as well as a few drawings by his chief pupil Niccolò Berrettoni and a handful of works by earlier artists including Parmigianino, Agostino Carracci, Taddeo Zuccaro, Federico Barocci and Guercino. The drawings in the album were laid onto mounts inscribed with the names of the artists. Owned by the Shirley family at Ettington Park in Warwickshire, the album was acquired from them in 1937 by P. & D. Colnaghi. Most of the Maratta drawings in the album were acquired from Colnaghi’s by private collectors such as Sir Robert Witt, Sir Brinsley Ford, Villiers David, Sir Thomas Barlow, Frits Lugt and Philip Hofer. Drawings by Carlo Maratta from the Ettington Park album are today in the collections of the Courtauld Institute of Art in London, the Barber Institute of Fine Arts in Birmingham, the Institut Néerlandais (Fondation Custodia) in Paris and the Rijksmuseum in Amsterdam.

The Head of a Young Boy [recto]; The Penitent Saint Peter [verso]