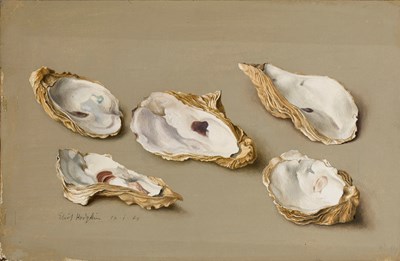 
In 1957, in response to an enquiry from the editors of The Studio magazine, Eliot Hodgkin provided a succinct description of his lifelong interest in still life painting: ‘In so far as I have any conscious purpose, it is to show the beauty of natural objects which are normally though uninteresting or even unattractive: such things as brussels sprouts, turnips, onions, pebbles and flints, bulbs, dead leaves, bleached vertebrae, an old boot cast up by the tide. People sometimes tell me that they had never really ‘seen’ something before I painted it, and I should like to believe this…For myself, if I must put it into words, I try to look at quite simple things as though I were seeing them for the first time and as though no one had ever painted them before.’ As the artist further noted nearly twenty years later, in a letter written to Brinsley Ford, ‘I like to show the beauty of things that no one looks at twice.’Dated the 12th of January 1961, this delightful painting of five oyster shells is an outstanding example of Hodgkin’s tempera technique, and of his preference for unusual still life subjects. It is also among the largest works by the artist. Two other paintings of oyster shells by Hodgkin were exhibited in London in 1963, while a painting of four oyster shells was shown at the Royal Academy in 1975. In all of these works, the artist has depicted the oyster shells at their actual size.