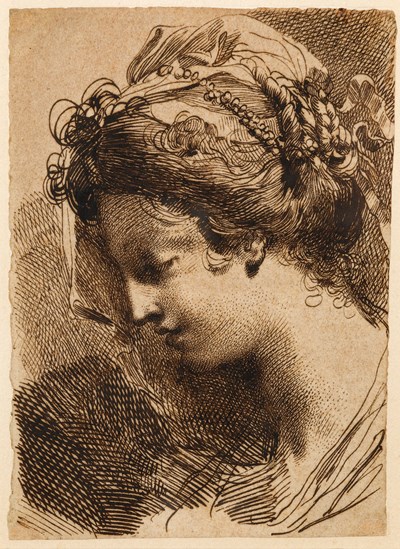 
This superb study may be included among a number of elaborate pen and ink drawings of studies of heads - mainly of young women, but also depicting boys, old men and children, often with several heads on one sheet – that are among Gaetano Gandolfi’s most appealing works. As James Byam Shaw has noted, ‘these groups of heads, closely juxtaposed, evidently had a great vogue in Bologna and elsewhere in North Italy’, and had earlier been seen in the work of such artists as Donato Creti. These beautiful, highly finished drawings by Gandolfi – some of which were signed - were probably made as autonomous works of art for sale to collectors. At the same time, however, the precise nature of the artist’s penwork made them particularly suitable for reproduction as prints, and indeed several of Gandolfi’s drawings of this sort were engraved in the 1780’s by his pupil Luigi Tadolini. Gaetano was already producing finished capricci drawings of this type by the 1770’s, and he continued to do so until at least the late 1790’s.A fine example of the artist’s draughtsmanship, the present sheet is a preparatory study, in reverse and of identical size, for one of Gaetano Gandolfi’s few etchings, depicting The Head of a Woman in Profile to the Right. The small etching, one of Gaetano’s rare forays into the medium, has been dated to the late 1770’s or 1780’s. (The etching also appears along with six other prints by Gandolfi, two of them signed, in a single large sheet; examples are in the Pinacoteca Nazionale in Bologna and in a private collection.) As Donatella Biagi Maino has noted of the present sheet, ‘This drawing, both for its preparatory character but especially for the superb quality of draughtsmanship and invention…should be considered an important addition to the catalogue of drawings by Gandolfi.’A nearly identical head of a young woman reappears on a drawing by Gaetano of eight different studies of heads, which was on the art market recently in Germany. Similar female heads may also be found throughout the artist’s painted oeuvre, such as a Portrait of a Young Woman in the Pinacoteca Nazionale in Bologna. It has been suggested that some of these heads may be portraits of the artist’s wife Giovanna.This drawing is sold with an impression of the etching for which it is a preparatory study (see related image).