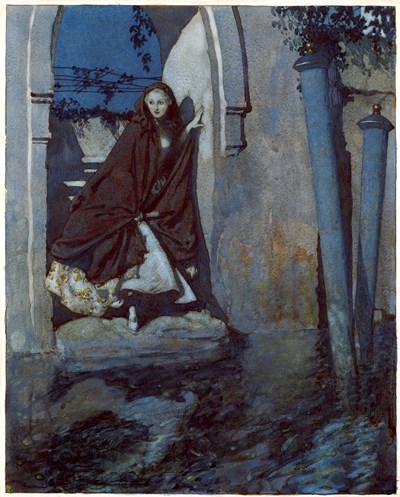 
This watercolour is the first of a series of four drawings used to illustrate the poem Venise by Alfred de Musset (1810-1857), published in the special Christmas issue of the magazine L’Illustration in December 1912. Dulac’s illustrations were deemed to be the ideal accompaniment to de Musset’s poem, as noted on the cover of this particular issue; ‘The indolent and voluptuous Venice of Alfred de Musset, evoked in compositions of a mysterious and disturbing charm by the very personal art of Edmund Dulac, that is the surprise reserved for the admirers of this prestigious watercolourist as well as for lovers of the old city of the Doges by the illustration of the famous poem whose gently rocking rhythm sings to the ear with the same rhythm of oars beating the water along the sides of gondolas....these four paintings inspired by the tender poet of the Contes d’Espagne et d’Italie reveal to us a new aspect, more sensitive, and, one could say, more human, of his talent....Another face of this incomparable city is revealed here, - her nocturnal face, passionate and langourous, where love displays all its melancholic grace. She appears, veiled in this blue transparent shadow, that follows the fine days in fortunate lands in which not even the darkness is black.’The model for the woman in this drawing is the artist’s wife Elsa Bignardi. Dulac’s illustration was captioned by one stanza of de Musset’s poem: ‘-Ah! maintenant plus d’une / Attend, au clair de lune, / Quelque jeune muguet, / L’oreille au guet.’ The other three drawings by Dulac used to illustrate the poem - each with the prominent figure of Elsa – depicted a woman getting ready for a masked ball, a pair of lovers in a gondola, accompanied by a musician, and a scene of masked figures in the Piazza San Marco. The drawings for Venise are among the last of the artist’s works in this distinctive tonality.