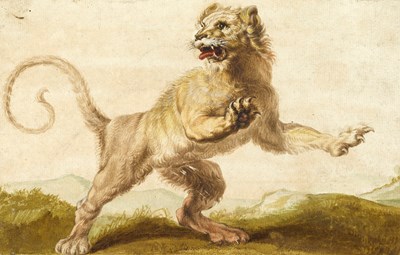 A Lion, after Rubens


The traditional attribution of the present sheet to Carl Andreas Ruthart, while tentative, would seem to be worth considering in light of the artist’s penchant for leaping animals in his paintings.The lion depicted in this drawing is based, in reverse, on part of an etching of two young lions at play by Abraham Blooteling after Peter Paul Rubens. Blooteling’s print is one of a set of four etchings of lions, each after designs by Rubens, published as Variae Leonum Icones sometime in the second half of the 17th century. The draughtsman may have been derived his composition from Blooteling’s print, or a contemporary, reversed copy of it. The same lion was used by Frans Snyders in a painting of Two Lions Pursuing a Roebuck of c.1620-1625, today in the Alte Pinakothek in Munich, and for a painting of The Lion and the Mouse of about the same date, at Chequers in Buckinghamshire. An impression of the related Abraham Blooteling etching is sold with this drawing.

Provenance:
Dr. Arthur Feldmann, BrnoLooted by the Gestapo on 15 March 1939, during the Nazi occupation of MoraviaAnonymous sale, London, Sotheby’s, 16 October 1946, part of lot 55Sir Robert Witt, London (Lugt 2228b)Bequeathed by him to the Courtauld Institute of Art, London in 1952Restituted to the heirs of Arthur Feldmann in 2007.

A Lion, after Rubens