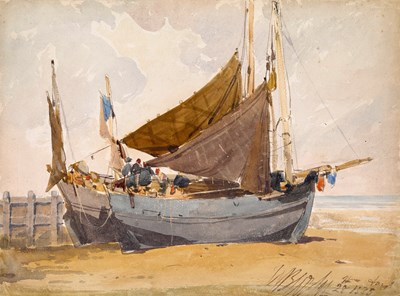 Fishing Boats on a Beach


An early work by the artist, this large sheet is a fine example of Beverly’s lively watercolour sketches. In one of the first critical reappraisals of the artist’s work, published in 1921, Frank Emanuel noted of Beverley that ‘there are numbers of charming little compositions and studies of boats and shipping, of which he had the completest practical knowledge, down to the smallest detail. Indeed, his knowledge of shipping was equal to that of any of the specialists in marine work...His drawing of the subtly curving lines of hulls, his delineation of spars and rigging, is absolutely faultless, and put in with a line unrivalled for certainty and purity.’ The scene depicted here is likely to be found in one of the fishing communities in the North East of England, where the artist made several sketching tours.

Fishing Boats on a Beach