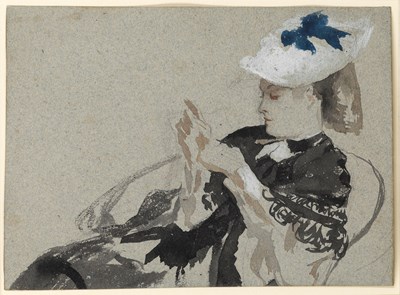 
This drawing can be related to a small group of around ten gouache drawings on blue paper, each depicting single figures of women in contemporary dress, which were produced by Tissot as studies for his first London paintings in the early 1870’s. As Michael Wentworth has noted, ‘The novelty and charm of English life inspired a series of pictures with English subjects that achieved the greatest success as they appeared at the Royal Academy exhibitions in the first half of the decade and are still generally considered to be his finest works. The handful of gouache studies he made for some of them have perhaps an even greater sense of excitement. Poised between the immediacy of first-hand experience and total artistic control, the nine gouache studies known today are unique in his oeuvre and are surely to be considered his most important drawings in terms of both technique and artistic quality.’ The recent rediscovery of the present sheet brings the number of gouache drawings in this group by Tissot to ten. Of the others, three are in today the collection of the Ashmolean Museum in Oxford, one is in the J. Paul Getty Museum in Los Angeles, another is in the Smith College Museum of Art in Northampton, Massachusetts, and one is in the Art Gallery of New South Wales in Sydney, Australia. Two further examples have appeared recently at auction and are today in private collections.Krystyna Matyjaszkiewicz, who has confirmed the attribution of the present sheet to Tissot, has compared it in particular to a gouache study of a seated woman, apparently the same model, in the Ashmolean Museum, which is a study for the painting of The Captain and the Mate of 1873. Also stylistically comparable is a gouache drawing of the same woman, wearing an identical bonnet and holding a pair of binoculars, which appeared at auction in 1998, while a more finished gouache of the same model, standing and wearing an identical bonnet and cape, was sold at auction in 1989. The model for each of these drawings was Margaret Kennedy Freebody, who posed for a number of Tissot’s Thames-side paintings of the early 1870’s. Margaret was the wife of a sea captain named John Freebody, whom Tissot befriended soon after his arrival in London. The artist appears to have painted on board two or three ships captained by Freebody; the Warwick Castle, the Arundel Castle and the Carisbrooke Castle. Margaret’s brother, Captain Lumley Kennedy, also appears in a number of Tissot’s paintings of this period.The present sheet, like three others from this small group of gouache studies of women by Tissot, cannot be related to a finished painting by the artist. As Matyjaszkiewicz has noted of a gouache drawing of a woman seated in a rocking chair, in the Smith College Museum of Art (also posed by Margaret Freebody), ‘Tissot made a number of gouache studies like this in the early 1870’s, perhaps choosing the medium for its proximity in effect to the surface of his paintings.’ Michael Wentworth has further suggested that Tissot’s use of gouache in these drawings may have been inspired by his work as a portrait caricaturist for the magazine Vanity Fair in the late 1860’s and early 1870’s, since the technique of gouache on blue-grey paper was common among illustrators.Datable to between 1871 and 1873, the gouache drawings related to Tissot’s earliest London paintings are, as Wentworth has described them, ‘among the most brilliant of his works...His mastery of the medium was as rapid and his use of it as brief as it was absolute. The nine studies that have been located are all single figures of women, drawn from life...They are brushed in with a freedom that does nothing to negate the marvelous attention to the details of costume and the precision of gesture and expression that lie at the heart of his art.’